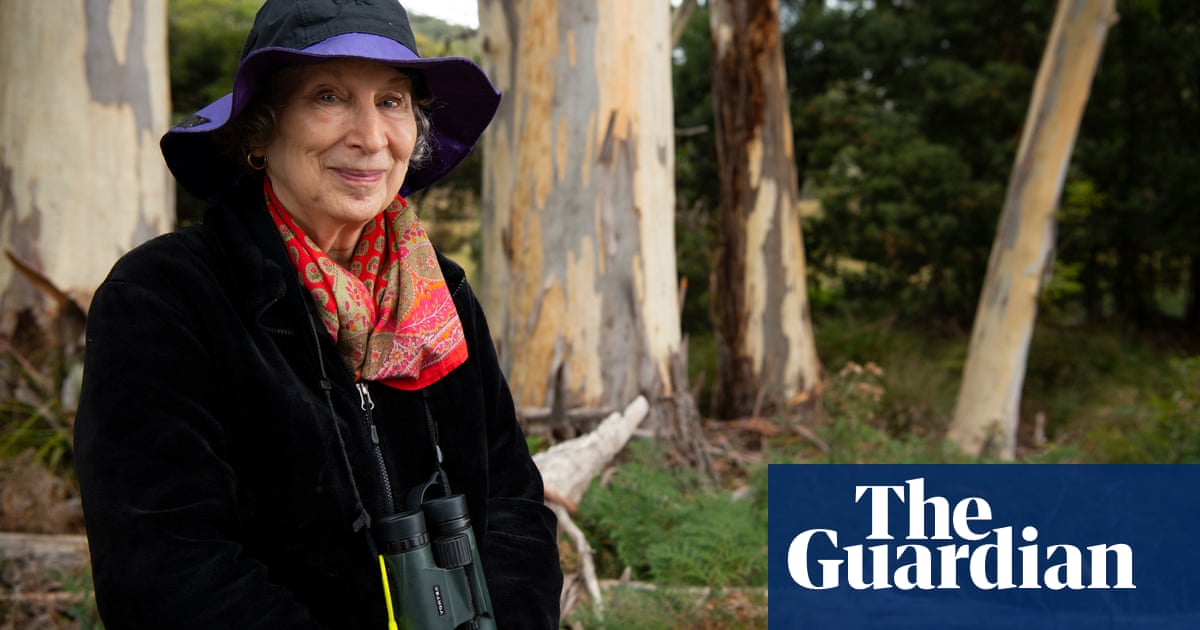 We stand under the bird viewing platform, the wind blowing, the giant white gum trees towering. Margaret Atwood, her face partly hidden beneath a black and purple waterproof hat and with binoculars slung around her neck, has a message.

“You need to tell them swift parrots are aliens from another universe and they’re here to explore if human beings deserve to survive,” she advises.

The critically endangered parrot, a small flash of different shades of green with a shock of crimson across its face, is what has brought Atwood here, to the south of Bruny Island, in the south of Tasmania.

The lionised author has been in Australia and New Zealand since early February for a series of “in conversation” events discussing her life, career and The Testaments, the Booker Prize-winning sequel to The Handmaid’s Tale. But, as she observes, promotional events are brief, over in a couple of hours. When not on the speaking circuit she spends much of her time in nature or lending her name to wildlife protection.

Atwood’s interest in conservation is not new, and has been flagged in dystopian works set in the wake of environmental collapse. She works regularly with Birdlife International and, with her late husband Graeme Gibson, hosted an annual bird-watching event at the Pelee Island Heritage Centre in Lake Erie. On this trip, the 80-year-old visited Zealandia, a fenced urban eco-sanctuary in Wellington, and joined Australia’s most celebrated environmentalist, Bob Brown, on a journey to the Tarkine, in north-west Tasmania, to show solidarity with anti-logging protesters.

And she has given time to Birdlife Australia and its campaign to boost protection for woodland birds. It’s Birdlife that has brought the writer to Bruny Island’s Inala Nature Reserve, a 600 hectare haven for endemic Tasmanian bird species, privately owned and developed by eco-tourism operator Dr Tonia Cochran. Atwood has agreed to record a video for the group. In return, hopefully, she will see a swift parrot in the wild.

These are not new stories, this has been going on for a long time

The swift parrot is a particular focus for scientists and conservationists. Its population has slumped in recent years, from more than 8,000 breeding pairs to what could be fewer than 1,000, partly due to predation from sugar gliders, but mostly due to the loss of its breeding habitat to logging, agriculture and urban expansion.

There are no sugar gliders on Bruny Island, making it an important refuge, but activists are concerned the potential end of a logging moratorium in some Tasmanian forests in April could accelerate the bird’s decline. Peer reviewed science suggests it could be extinct by about 2030 if its current trajectory continues.

Atwood didn’t know a journalist had been invited to tag along on her birding trip until the day beforehand, and it is made clear that the focus should be the parrot, nor her. A minder suggests we steer clear of politics. But the writer is quick and blunt when asked to reflect on what she has learned of the bird’s plight.

“These are not new stories, this has been going on for a long time,” she says. “It’s another instance of horrible management and short-sighted stupidity.

“I mean, there is no shortage around the world of people behaving like this, or failing to do the math or failing to realise that if the planet dies so will they. Human beings will go before nature does. What’s left of it will carry on.”

As we arrive at Cochran’s viewing platform, the sky is grey and rain threatens, but the birdsong and smell of flowering gum is a delight. A handful of forty-spotted pardalotes, an endangered species that lost about 60% of its population between late last century and 2010, flit overhead, enjoying the white gums that provide its major source of food.

Cochran and Sean Dooley, Birdlife Australia’s national public affairs manager and Atwood’s friend and guide, point out other species on display: black-headed honeyeaters, new Holland honeyeaters, tree martin swallows. The expert birders detect the presence of a swift parrot, but it remains elusive to those among us with less experience.

Atwood asks if there is a reason the nest boxes nailed into some of the gums are painted a deep dark green. If there is, it isn’t a good one: Dejan Stojanovic, leader of Australian National University’s difficult birds research group, says boxes painted white are up to 10C cooler on hot days. It can be the difference between some birds surviving or dying of heat stress. The green boxes are being replaced.

Told the box manufacturer has been slow to phase out green boxes when informed they pose a health risk to birds, Atwood says: “Well, tell them if they don’t change the colour you’ll run a campaign against them.”

Campaigns, and how to get the message across, are on everyone’s mind. We descend from the platform and shelter under it as first Dooley, then Stojanovic, then Atwood, address the camera. Atwood’s suggestion that Stojanovic just say swift parrots are visitors from the depths of space here to examine if we are worth the effort is laughed off – “I think the answer to that is clear!” – as he opts for something more direct. “If we don‘t stop logging swift parrot breeding habitat today, the species will go extinct.”

He continues: “Travelling around Tasmania, I’ve become intimately familiar with the locations these birds need to nest to rear their offspring, and it’s actually quite common to arrive at a location to find it’s been clear-felled for industrial logging or, for instance, been felled illegally for firewood collection. This has happened across the breeding range of swift parrots in the time I’ve been working on it. It’s really been quite a devastating experience.”

We shuffle to the edge of white gum and stringybark forest that borders an area listed for potential future logging to talk with researchers nailing the new white nesting boxes into trees, then visit a former logging coupe, where hollowed old trees suitable for breeding used to stand. Birds are everywhere but a final attempt to find either a swift parrot or a Satin flycatcher fails, and we head back to the ferry.

As we wait to depart, Atwood is ready to talk. She sees a clear a link between the loss of Tasmanian forests discussed today and damage being inflicted on the environment across the planet. But don’t ask how she feels about it.

“Nature doesn’t care what I feel,” she says. “If we run out of oxygen the planet won’t care what I feel, but a lot of human beings will suffer and die. Let’s ask them how they’re going to feel because I’m going to be dead, quite frankly. I’m too old to really be part of that future picture unless things happen really fast.

“Let’s hope the human race pops awake and decides not to go extinct itself because (if we) kill the oceans, that’s it, end of story.”

Despite this, Atwood does see some cause for hope in Extinction Rebellion and the activism of the young. “Ask any 10-year-old,” she says. “They already know the story, and they seem to know it better than a lot of politicians, so any politician who can count is going to have to take into account the fact that pretty soon these people are going to be voting.

Margaret Atwood: ‘For a long time we were moving away from Gilead. Then we started going back towards it’

“It’s a choice that people are going to have to make. Do you want to be the only species that had a prior awareness of its own extinction and chose to go over the cliff anyway? Is that who we want to be?”

She is dismayed that only a small fraction of charitable donations go to nature, and that much of that is dedicated to species that don’t really need it. Meanwhile, we spend up big on holidays. “Why aren’t dollars going into this? Because people take it for granted,” she says.

“Extinction is a choice. There’s your quote, Adam.”