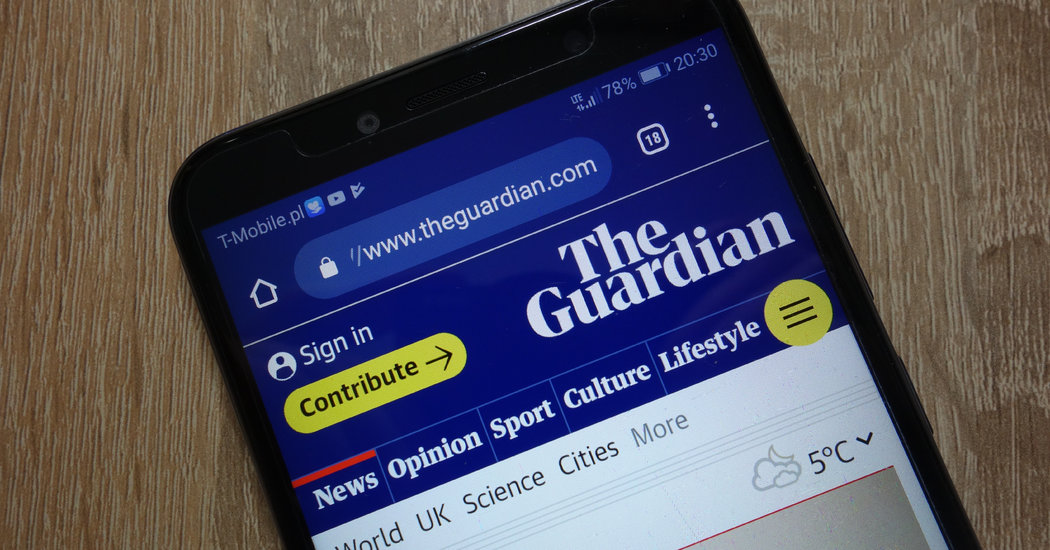 The Guardian newspaper said it would stop accepting advertisements from oil and gas companies, making it the latest institution to limit financial ties to fossil fuel businesses.

The announcement highlights how the risk of climate change is increasingly recognized and discussed in the business world, just days after climate change took center stage at the World Economic Forum in Davos, Switzerland.

“Our decision is based on the decades-long efforts by many in that industry to prevent meaningful climate action by governments around the world,” said Anna Bateson, the acting chief executive, and Hamish Nicklin, the chief revenue officer, in a statement on Wednesday.

The British newspaper said in October that it would stop referring to “climate change” and use terms like “climate emergency” or “climate crisis” instead. “We need to tackle it now, and every day matters,” said Katharine Viner, the editor in chief, at the time.

The Guardian is owned by a charity, the Scott Trust, which has already shifted its investments away from fossil fuel investments. Fossil fuel-related investments now represent less than 1 percent of its fund, the newspaper said. The Guardian Media Group has also committed to getting its emissions down to net zero by 2030.

The Guardian and its Sunday paper, The Observer, rely on advertising for about 40 percent of their revenue, but the statement did not say how much came from fossil fuel extractors.

The executives conceded that the company could have taken bigger steps to put pressure on the companies that advertise with them.

“Of course we know some readers would like us to go further, banning ads for any product with a significant carbon footprint, such as cars or holidays,” wrote Ms. Bateson and Mr. Nicklin in their blog explaining the reasons behind the decision. “Stopping those ads would be a severe financial blow, and might force us to make significant cuts to Guardian and Observer journalism around the world.”

Greenpeace, which had petitioned for an end to oil companies advertising in the media, said that other media, arts and sports organizations should follow suit.

“For too long fossil fuel giants like BP and Shell, who are causing our climate emergency, have been able to get away with green wash advertising while investing 97 percent of their business in oil and gas,” said Mel Evans, a senior climate campaigner for Greenpeace UK, in a statement. “Oil and gas firms now find themselves alongside tobacco companies as businesses that threaten the health and well-being of everyone on this planet.”

Advocacy group 350.org, which works to raise awareness about the danger of climate change, urged other media companies to follow The Guardian’s lead.

There has been a growing shift against accepting money more broadly from fossil fuel giants by institutions across the arts. Last year, British artists, including Antony Gormley and Anish Kapoor, called on the National Portrait Gallery in London to cut ties with BP. The actor Mark Rylance resigned from a position at the Royal Shakespeare Company because it accepted money from BP to subsidize tickets for young people.

The chief executives of major European oil companies have reacted to the criticism by saying they are working to reshape their companies into producers of energy that generates lower amounts of greenhouse gases, but that this shift will require decades, the cooperation of governments and a range of industries, and acceptance by consumers.

Mr. van Beurden characterized the move to lower-carbon energy as “a system challenge of unimaginable proportions that can only be done if we have collaboration at levels not yet displayed.”

Mr. van Beurden said that Shell was slowly building a portfolio of lower-carbon energy sources like natural gas and electric power generation, but he conceded that the industry had work to do to make clear to the public that it was working seriously on solutions for climate change.

“The sector needs to do more to explain how it is serving society,” he said.