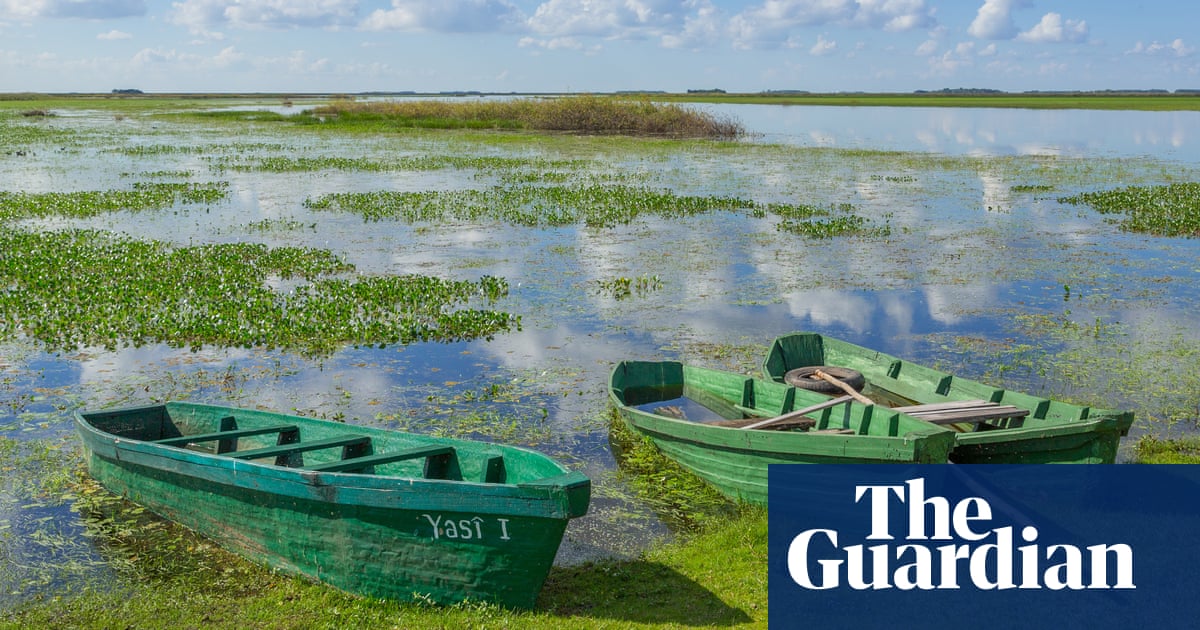 Juan cut the engine and we drifted across Laguna Fernández, its mirror-flat surface reflecting cotton-wool clouds, the silence broken only by the raucous cry of a crested screamer. Soon, a leathery snout emerged from a tangle of grasses, a full set of jagged teeth followed by an unblinking eye. It was the first of many basking yacaré caiman, the crocodilian reptile once hunted for its skin but now protected. For an instant, I caught the eye of a surprised marsh deer as it tiptoed across a floating island to drink from the lake, but before I could grab my camera it was gone.

The Iberá estuaries – iberà means shining waters in the indigenous Guaraní language – form one of the world’s largest freshwater wetlands, covering around 13,000 sq km in the Corrientes province of north-east Argentina. This wilderness, where floodplains, Chaco grassland and subtropical forest converge, is home to more than 4,000 species of flora and fauna, including more than 360 species of birds. Two decades ago it was under threat; now, it’s one of South America’s pioneering conservation and ecotourism projects.

It’s all thanks to American entrepreneurs-turned-conservationists Kris Tompkins and her late husband Doug (who died in 2015) – former CEO of North Face and founder of Patagonia respectively. When, in the late 1990s, they discovered this area of huge biodiversity, they saw an opportunity to buy land (much of which was privately owned cattle ranches), restore the ecosystem and hand it back to the government – provided it received national park status. Alongside this would run a programme of conservation education and local development through ecotourism projects.

The Tompkins’ Conservation Land Trust (now the Rewilding Argentina Foundation) bought four pockets of land across the wetlands, three of which have been granted national park status; the final piece is being donated later this year. This will make its 158,800 hectares of land, combined with the neighbouring Iberá provincial park (jointly known as Great Iberá Park), the largest protected area in the country.

Part of the conservation strategy involves enlisting the support of locals. The majority of them make a living from livestock, but ecotourism projects are set to benefit Iberá’s communities, creating job and training opportunities that weren’t available before.

“Many of the younger generation have to move away to find work but it’s estimated that in 10 years the Iberá park will receive more than 100,000 visitors a year. Our aim is to show local people that they can generate a sustainable income from tourism – from working at the lodges or campsites, providing services, or opening their own guesthouses,” says resident biologist Talia Zamboni. “Former hunters are now using their knowledge of the wetlands and its wildlife to become nature guides.”

Working with local partners, Rewilding Argentina has built four campsites at accessible points across the wetlands. Each has a different appeal. Cambyretá has a flock of recently released red-and-green macaws, Carambola is where visitors can swim with horses, and in the picturesque main settlement of Colonia Carlos Pelligrini, it’s possible to get a taste of local life, as well as get up close to local fauna on a kayak tour of the lagoon.

A luxury lodge, Hosteria Rincón del Socorro, was opened in 2001 – a one-hour drive from Laguna Iberá and Colonia Carlos Pelligrini – to help fund the project, but my base was Posada Uguay, a 30-minute drive from Hosteria Rincón. This rustic four-bedroom retreat is in the private 60-hectare Guazu-Cuare reserve and it’s in such a tranquil spot that I could hear the beating wings of the iridescent hummingbirds that flitted around the garden, as well as the sonorous calls of distant howler monkeys.

Juan, who has lived in Uguay village all his life, used to work at Rincón with his wife, Luisa. Now they are in charge of the posada, where I savoured homemade bread covered in dulce de leche caramel for breakfast, while afternoon tea meant moreish chipas – warm, cheesy dough balls – washed down with the Argentine obsession of mate (tea).

On a hike from the posada with Florencia, the English-speaking guide, I saw how far the land had come from its cattle ranching days. The pink-tinged grass was now thigh-high and in a patch of forest scented with Paraguayan jasmine, we stopped to look at giant trees entwined in a liana’s embrace and the tracks of a long-legged fox.

Along with restoration of the grasslands, there’s also a plan to bring back six species now extinct in the region. Once jaguars prowled these wetlands but habitat loss killed off their prey and made them vulnerable to hunters: they have been missing from this ecosystem for nearly a century. In 2011 a jaguar reintroduction scheme was launched on the secluded island of San Alonso in the centre of the wetlands. It began with five adults donated from zoos and rescue centres and has been a resounding success. In June last year, Rewilding Argentina announced the arrival of two jaguar cubs, the first born in Iberá in decades. The cubs have had no human contact and, despite being raised in a zoo, their mother taught them to hunt after honing her skills with a supply of live capybara, the world’s largest rodent.

Now, the juvenile jaguars are in a large pen on their own and – along with three adults – will be released into the wetlands over the course of this year, with the ultimate goal of building a 90-strong jaguar population. It’s a key step in the process of rewilding Iberá, and if it works, the wetlands will become one of the best places in the world to spot the predator in the wild.

The wetlands have also been repopulated with anteaters, green-winged macaws from London zoo, pig-like collared peccaries, tapirs and pampas deer. The giant otter – globally endangered and extinct in Argentina – is the latest rewilding project: last year an eight-year-old female from Budapest zoo began a new life in Laguna Paraná on San Alonso, and they’re looking for a partner for her.

On a leisurely horse ride, I spied collared peccaries and later stopped outside the vast pampas deer reserve and watched through binoculars as a male scratched his impressive antlers against a tree. Soon they’ll be ready to roam free.

Juan showed me around Uguay: just 20 families, a tiny church and a school. When the Tompkinses began their project, conspiracy theories were rife among locals about the billionaire gringos – did they want the land for a secret military base, or were they planning to steal the water? Now they’re more accepting – among other community projects, the school now has electricity thanks to Conservation Land Trust.

“I think the outlook about conservation will change, but things move slowly here,” says Juan. “When Uguay got electricity in 2010, it was five years before the elders agreed that it was a good idea.”

Back at the posada, dinner was a traditional asado (barbecue), a cornucopia of meat cooked over the kitchen’s open grill, along with vegetables from the garden. A bottle of malbec from Mendoza stood on the communal table.

Smoke wafted into the garden and the setting sun had streaked the sky myriad shades of orange. I sat on the terrace and watched until the fireflies began to dance to the nightly frog chorus, and wondered if soon jaguar would be among the wildlife roaming this special part of the world.

• Stays at Posada Uguay cost from £75pppn, including all meals and activities. Reach Iberá from Buenos Aires on a five-hour drive or take an overnight bus to Mercedes in Corrientes. There’s a shared two-hour transfer to Mercedes for £15pp on Mondays, Thursdays and Saturdays, departing Mercedes at 6.30am and departing the lodge at 6.30pm; private transfers cost £116 in a 4WD for up to four people. Flights were provided by Journey Latin America

Looking for a holiday with a difference? Browse Guardian Holidays to see a range of fantastic trips