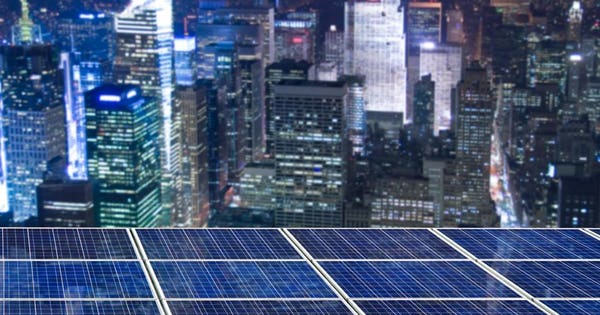 II‐VI Incorporated makes 3D sensing technologies and it wants to reduce its carbon footprint by installing a microgrid at its New Jersey manufacturing facility. It is using a localized grid because the electric utility is unable to supply the amount of power it needs to keep up with its growth.

That is also happening at hospitals, universities and technology companies — enterprises that can’t afford a loss of power for minutes much less several days. Those microgrids are designed to work in unison with distributed energy resources like solar panels and battery storage as well as fuel cells — the types of 21st Century technologies that are not just more reliable but potentially, much cleaner.

As for II‐VI Incorporated, Bloom Energy built it a 2.5 megawatt power system in nine months. Its solid oxide fuel cell technology takes natural gas or a biogas and converts it into electricity. And the company says that its capacity factor — actual output in relation to its nameplate capacity — is 90% compared to about 25% for solar energy and 40% for wind power.

“We are converting the chemical energy from methane in a single step to electricity,” says Asim Hussain, vice president of commercial strategy for Bloom, in an interview. “When you do it in a single step, it is far more efficient. This is not a traditional combustion system. We emit a lot less CO2 and compared to the U.S. grid mix of energy resources, we reduce emissions by 50%.”

Hussain, who spoke to this reporter on the sidelines, was a panelist at the Microgrid Knowledge 2019 conference in San Diego this week.

The fuel cell and the microgrid can be independent of the central grid or they can be set to kick in when the utility-provided power goes out. They are different from on site distributed generation that directly burn fuels that are used to power whole campuses. The fuel cell efficiency rate is between 40% and 60%, say experts, meaning that for each unit of energy that is input, roughly half is returned in the form of power. But if the waste heat is captured in a co-generation plant, then those efficiencies are about 85%.

Fuel cells work by combining hydrogen and oxygen. That process requires other fuel sources to break apart the elements. Right now, hydrogen is produced mainly from natural gas using steam reformation, which does nothing to limit the reliance on fossil fuels or the infrastructure that must carry them. The end product, however, is emissions free.

“There are no smog forming particles,” says Hussain. “We are producing electricity far more efficiently than combustion-based plants. “And we are using it on site, meaning that we do not lose it on transmission. This allows us to reduce greenhouse gas levels.”

According to Navigant Research, about 500 new microgrid projects have been deployed around the world in the last six months. A key reason for on site generation and microgrids is that total annual cost of power interruptions to the U.S. economy is around $200 billion.

It is about being reliable and resilient, or quickly coming back from an outage. The biogas that Bloom uses to create electricity is also known as renewable natural gas, which is produced from any organic material found in landfills, sewage treatment or bio-digesters. It is a substitute for fossil fuels in microgrids.

Bloom is working with Southern Company to power a biogas pilot at a landfill. The company says that its 50 kilowatt Bloom Energy Server began in February and is delivering renewable baseload power into the local grid. Ebay installed about five Bloom Boxes on its main campus. It says that it is now using 15% less electricity, saving it many thousands of dollars. Staples and WalMart are doing something similar with the fuel cell maker.

Meantime, the city of Phoenix, Ariz. is taking raw biogas produced at its wastewater treatment plant and cleaning it before it is compressed and injected in natural gas pipelines. The city is converting an existing resource into energy that would otherwise get sent into the atmosphere and create greenhouse gas emissions.

“If you want to island — (to break free from the central grid) — you need some form of combustion process to sustain a lengthy outage,” says Michael Bakas, executive vice president of Ameresco, in an interview with Microgrid Knowledge. So far that’s meant using fossil fuels. “Solar and solar storage will not carry you through. You need a peaker plant or a cogeneration plant.”

The conversion process has a cost associated with it, which means that renewable natural gas is more expensive than natural gas. But Bakas points out that using cleaner energy provides not only an environmental benefit but also an economic one, as the cost of the technology falls.

“We are not back up on only,” adds Bloom’s Hussain. “We are always on. We are meant to serve all the time. Look at the cost per kilowatt hour. That is where we are competitive. Do not just look at the cost of capital.”

Whether it is increased sustainability or improved reliability, American enterprise is driven to search out new technologies. And oftentimes that involves using solar photovoltaic, wind turbines, and fuel cells. The more clean energy resources are brought online, the more that those technologies will improve and prices will fall, all of which will compound the environmental benefits.