Why Global Citizens Should Care
There are more refugees today than at any time since World War II. Angelina Jolie, in her capacity as a special envoy for the United Nations refugee agency, urges countries to address the root causes of displacement. You can join us in taking action on related issues here.

Not long ago, the majority of the world’s refugees came from Europe.

Angelina Jolie, Special Envoy for the UN High Commissioner for Refugees (UNHCR), makes this point in a new piece ahead of World Refugee Day, urging countries that are closing their borders to reflect on the past. “The distance between us and the refugees of the past is shorter than we think,” Jolie said in her first piece as Time’s new contributing editor.

Jolie used her platform to draw attention to various crises around the world, which have created more refugees than at any time since World War II. She says that when she first joined the UN’s refugee agency 18 years ago, there were 40 million displaced persons. In 2018, there were 70.8 million displaced people, with an estimated 37,000 people fleeing their homes every day, according to a new report by the United Nations.

The human rights advocate argues that the world’s leaders are failing to meaningfully address the root causes of these crises.

“States often put business and trade interests ahead of the lives of innocent people affected by conflict,” she writes. “We grow tired or disillusioned and turn our diplomatic effort away from countries before they’ve stabilized. We seek peace agreements, as in Afghanistan, that don’t have human rights at their core. We barely acknowledge the impact of climate change as a major factor in conflict and displacement.”

The Syrian civil war, for example, has lasted for more than 8 years partly because an international stalemate has prevented peace discussions from gaining serious traction. An estimated 13 million Syrians have been displaced by the war, and more than 400,000 people have been killed. The UN, meanwhile, has only received 21% of the funds it has asked for to deal with this crisis, Jolie notes.

Read More: Why Angelina Jolie Wants Her Daughters to Follow In Her Footsteps 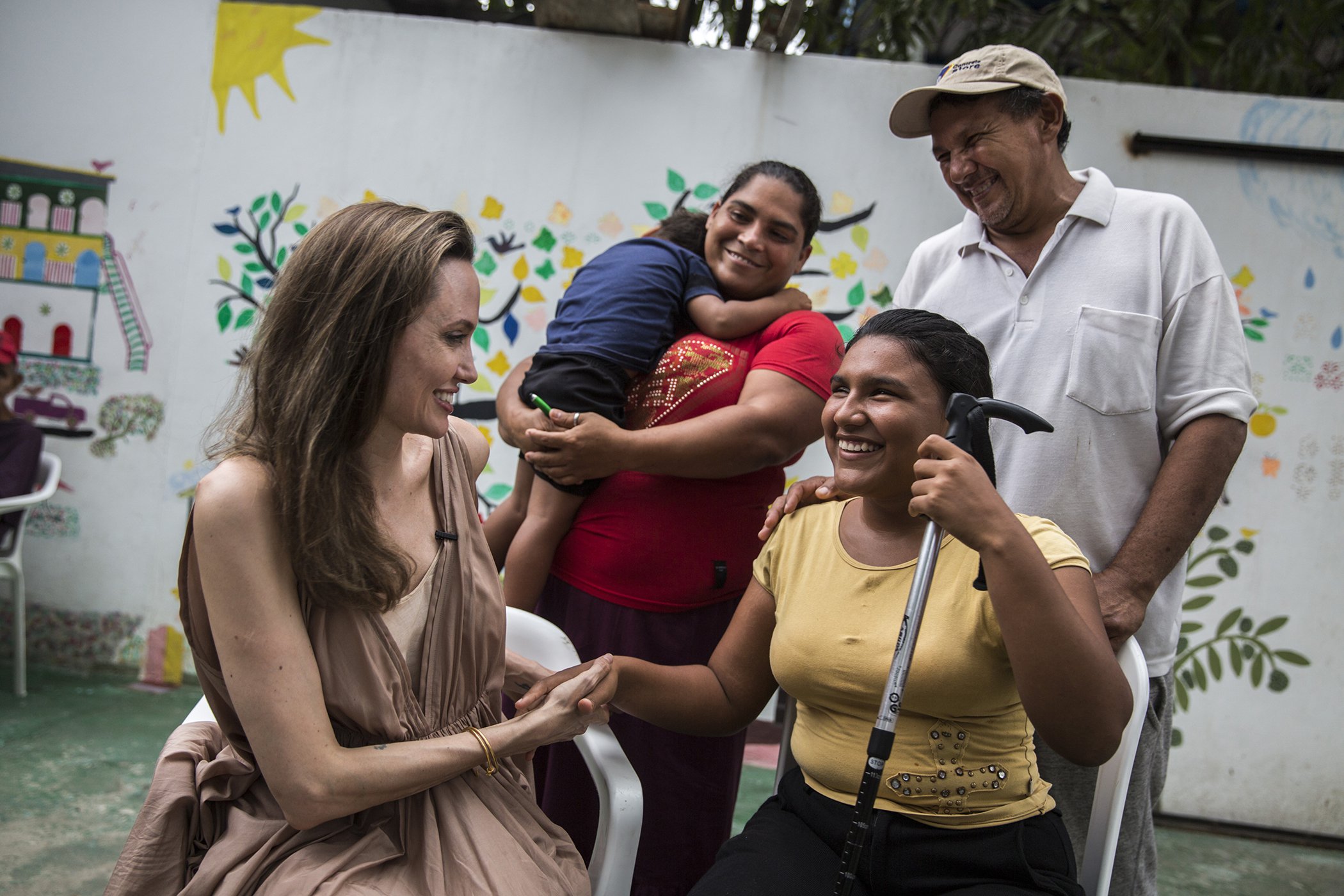 UNHCR Special Envoy Angelina Jolie meets with Ester Barboza, 17, who has been blind since age three and fled Venezuela with her family due to lack of medical care, in Riohacha, Colombia.
Image: © Andrew McConnell/UNHCR

In Venezuela, millions of people have been forced to flee their homes over the past few years because of an economic crisis that has made it difficult to access food, water, health care, and education.

Long-standing conflicts in Iraq and Afghanistan continue to displace hundreds of thousands of people, and more than 1.5 million people were newly displaced by emerging conflicts in Ethiopia in 2018, the UN reports says.

As UNHCR Special Envoy, Jolie has consistently advocated for displaced persons. She has campaigned for improved education for children refugees, called on countries to treat Venezuelan refugees with compassion, and regularly highlights the plight of Syrian refugees.

She has also advocated for an end to the war in Yemen, condemned the Rohingya genocide, and is working to end rape as a weapon of war.

The humanitarian hasn’t shied away from directly challenging political leaders, and in her latest op-ed, she criticizes policies in the United States that are hostile to refugees.

“Why are politicians being elected on promises to shut borders and turn back refugees?” she writes.

“It is an illusion to think that any country can retreat behind its borders and simply hope the problem will go away,” Jolie says. “We need leadership and effective diplomacy. We need to focus on long-term peace based on justice, rights and accountability to enable refugees to return home.” 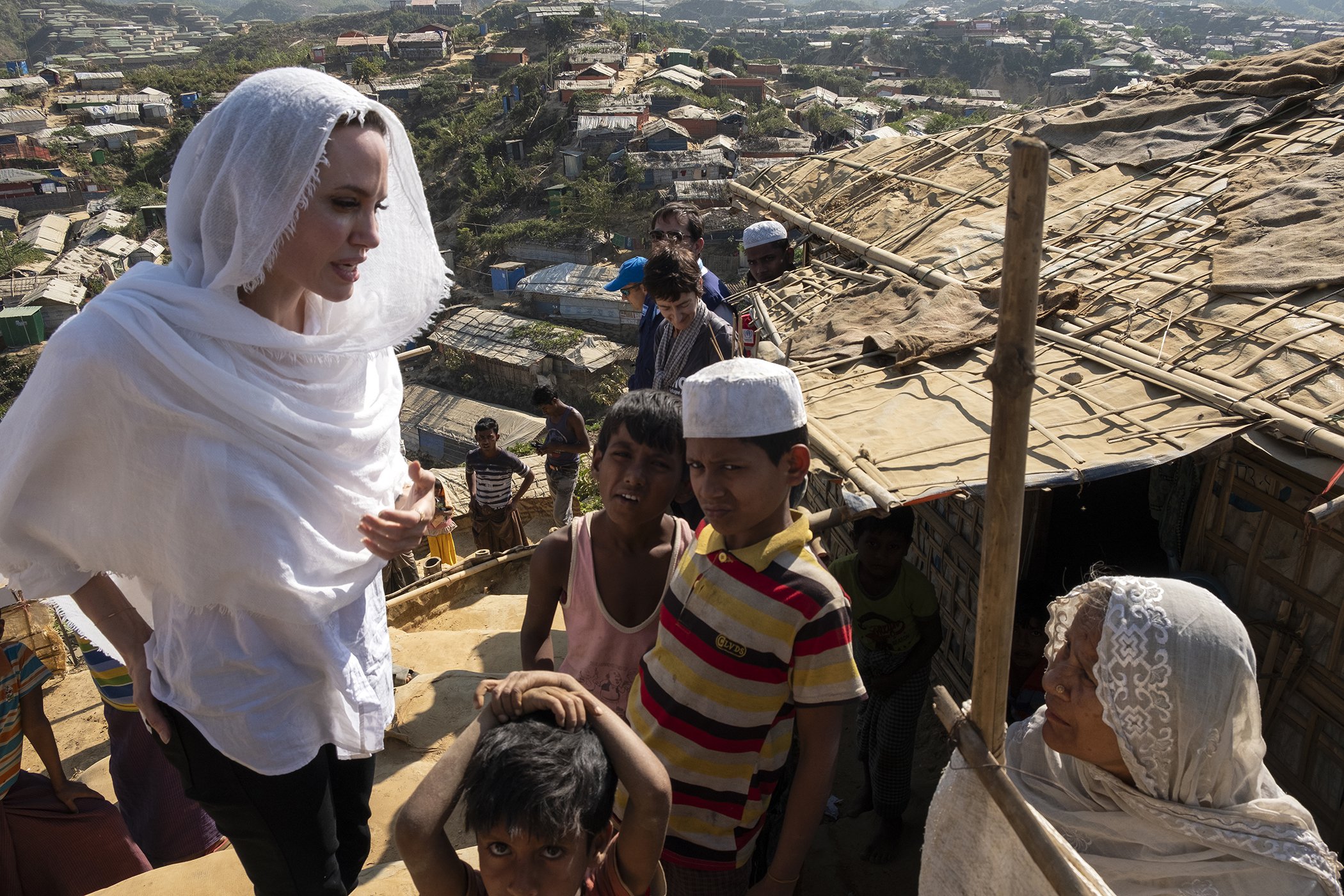