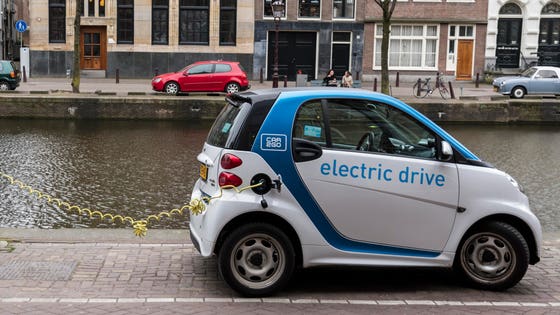 Amsterdam has announced that it is considering a ban on the use of internal combustion vehicles—meaning diesel and gasoline-powered cars and trucks— inside the city by 2030. What will it look like for a single city to take such a step?

Amsterdam has a population of about one million people. Electric Vehicles (EVs) and bicycles are already popular in Amsterdam, so let us assume that the city can feasibly replace diesel and gasoline transportation within its own city limits. If so, the city must still address transportation coming from beyond Amsterdam and traveling from Amsterdam to destinations beyond. After all, Amsterdam is a major metropolis in the Netherlands and a major city in Europe. It does not want to cut itself off from the rest of the world.

If someone is visiting Amsterdam from Rotterdam, she can take the train, but she may not want to. Will Amsterdam build new, giant parking lots outside of the city to accommodate those who drive to Amsterdam in non-electric vehicles? Those parking lots would be large expanses of concrete, destroying green spaces and attracting traffic, noise and air pollution to a suburban locale.

If someone from within Amsterdam wants to travel to Munich (about 520 miles), she can take the train or a plane. However, if she wants to drive—maybe she has to transport a few people or a significant amount of luggage—an EV would make the trip very difficult. An EV would require at least one recharging and probably two, which regularly takes 40 minutes or more per recharge.

Perhaps the most significant issue will be when vendors bring deliveries from outside of the city into Amsterdam. In order to comply, a vendor would need a battery-powered truck or a truck that runs on compressed natural gas (CNG). Both of these options present significant logistical drawbacks and are not attainable for all vendors. The alternative would be that vendors could bring goods to a point outside of the city and transfer the goods to an EV or CNG truck, at significant added cost and time. This would be reminiscent of the early days of motor vehicles, when city streets could not handle trucks so deliveries were transferred to horse-drawn carriages outside of the cities. It would be a serious disincentive for vendors to deliver to Amsterdam without significant surcharges.

Amsterdam’s idea is surely driven by consideration for the noise and air pollution within its city, but it has the potential to isolate the city from the rest of the Netherlands and Europe.