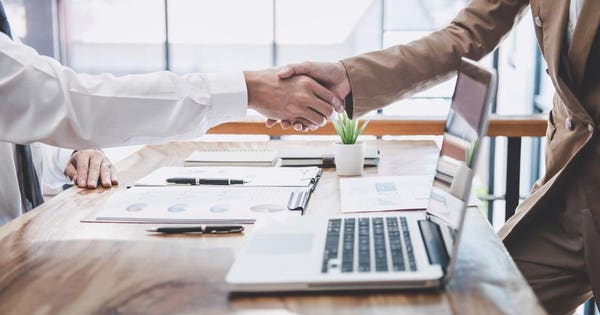 Business team two executive shaking hands after a meeting and conference to sign agreement and become partner in the office, results of their successful teamwork, contract between their firms.

Famed cryptographer Nick Szabo may have coined the term “smart contract” back in 1994, but DocuSign can make a compelling case for being its true inventor. Since its founding in 2003, firms of all sizes and industries have relied on the company to streamline the contract process through its best-in class security, identity authentication, user interface, and integration with leading business suites. Today DocuSign has 500 thousand paying customers, and it earned over $700 million in revenue last year.

However, the company is not resting on its laurels and instead is seeking ways to improve its service offerings, with much of this experimentation incorporating blockchain technology. Over the last few years this testing has included trials, demos, and partnerships on both Bitcoin and Ethereum. The company also joined the Accord Project, an open-source software initiative that was established to develop a technology stack for smart agreements. Furthermore, last week the company invested in a $5.5 million Series A round for smart contract provider Clause alongside Galaxy Digital with the goal of making contracts on their DocuSign Agreement Cloud “self-executing” and “self-aware” in an ongoing fashion, rather than just one moment in time.

Given the core facets of DocuSign’s business and its research into blockchain technology and smart contracts, the San Francisco-based company is in an unrivaled position to assess their utility and applicability to the needs of today’s businesses. Still, the road to blockchain adoption has not been a straight line, and the company’s plans face many of the same hurdles that other potential adopters are trying to clear. To better understand DocuSign’s future direction, I had an opportunity to speak with Ron Hirson, DocuSign Chief Product Officer, who shed additional light on these endeavors, provided context for the company’s investment in Clause, and offered expectations for how blockchain will impact the company moving forward.

When individuals think of major enterprise users of blockchain, the first companies that come to mind often include blue-bloods such as Facebook, IBM, and JP Morgan. However, DocuSign has been experimenting with the technology since 2015, when it built a “smart-contract meets smart-asset meets smart-payment” demo with Visa on top of the Bitcoin blockchain. According to Ron, the collaboration aimed to determine whether they could utilize Bitcoin so that a user could “buy a car while sitting in the car”, and have it start provided that the buyer’s insurance was up to date.

Then in 2018, the company joined the Enterprise Ethereum Alliance (EEA), a 250+ member global organization that builds open standards aimed at promoting the adoption of Ethereum-based blockchain applications. As part of this partnership, DocuSign created a pilot where clients could store a hash, or a cryptographic fingerprint, of a completed agreement on the public Ethereum blockchain as an independent system of record for interested parties.

However, as exciting as these experiments were, neither went mainstream for reasons that will ring familiar to active followers of the enterprise blockchain space. According to Ron, the POC with Visa was primarily an opportunity to learn, and the Bitcoin blockchain was chosen because it was by far the most prominent platform in 2015 (remember Ethereum did not officially launch until July 30, 2015), even if it was not tailor-made for this use case. Even then Bitcoin’s limitations in functionality, data storage, and throughput were well known to industry observers.

It is perhaps for these reasons that the company joined the EEA in 2018 and built its second project on top of Ethereum. However, despite more functionality, the pilot did not gain widespread adoption because customers already felt comfortable with DocuSign serving as a store of record. Ron made it very clear in his conversations to me that most customers did not see a need for an independent audit trail. He also noted that education was not a problem, as he and the company “pitched this broadly, stood on stage, screamed from the mountaintops, about that we have this capability, and the uptake from customers who are interested in it is fairly low because they don’t see the need.”

Speaking more broadly about DocuSign’s global customer base and blockchain’s shortcomings to this point, Ron underscored the massive challenge facing technologists and blockchain enthusiasts. He provided a hypothetical about a client trying to meet its sales goal before the end of a quarter. Putting himself in the customer’s shoes he said “I can’t rely on an open source system that may or may be available, may or may not have the latency that I need, and oh my gosh it is way too expensive to store all these files. Plus, there is no compelling UI for me to engage in these kinds of systems.”

Undaunted and Moving Ahead With a Clearer Vision

In spite of this feedback, Ron and the rest of the company believe in the potential that blockchain technology has for its product lines, and it is continuing to drive forward. However, from these initial experiments, it became clear to the team at DocuSign that for blockchain technology to transform their business and deliver client value, the benefits from the technology must move far beyond “nice to have”. In a sense, the company would need to find a value proposition that was unavailable before the invention of blockchain technology.

Rationale for the Clause Investment

It is for this reason that as reported last week it invested in smart-contract technology provider Clause. The startup has built a promising business by leveraging its platform to enable users to add smart clauses to documents that automate business processes, workflows, and digital transactions. What this means in layman’s terms is that contacts that utilize Clause’s technology can run in the background until a specified date, time, or event and execute when a certain condition is met. In my conversations with Ron, he highlighted a demo that the company unveiled at its annual Momentum 2019 conference last month, whereby this new platform could be utilized to authenticate new drivers for a ride-sharing platform on an ongoing and persistent basis.

This speaks to the true potential of this collaboration. DocuSign is in many ways the epicenter of complex business processes that take place behind the scenes when a contract is signed. By incorporating these “smart clauses” into future contracts a lot of this work can become automated, removing middlemen such as title or escrow agents, offering a more streamlined and efficient process for all involve parties to an agreement all the way through to payment.

An Auspicious Start, but Many Challenges Ahead

It is clear that DocuSign is setting its sights much higher this time. However, much still needs to be developed regarding this partnership, including which platforms it will run on, the first use cases, and an initial set of customers. Within this context it is important to note that Clause’s code can run on top of any blockchain or non-blockchain platform. Additionally, the collaborators will still need to find solutions for the scalability, accessibility, and security problems noted above, not to mention solving these challenges with the elegant user interfaces that its customers have come to expect. Being able to work on top of multiple blockchains should help.

Additionally, the partners will need to find and utilize oracles that never go down and cannot be hacked or manipulated. For readers unfamiliar with the term, oracles are data feeds that smart contracts rely on to determine when a condition is met that would cause the contract to self-execute. Today, there is no foolproof way to prove the fidelity of an oracle, and it is a long-standing problem that blockchains cannot differentiate between good and bad data being fed into the system. For a partnership like this to truly succeed they will need to find a solution, which is something that the partners dutifully acknowledge.

Solving these challenges will require heavy lifting, and in recognition of the size of this undertaking DocuSign has a product manager and entire engineering team focused on the technology. Therefore, it seems unlikely that lack of resources will be an issue, boding well for the future. After all, the prize is big enough to justify the cost, because if the collaborators succeed, this partnership has the potential to impact every industry under the sun.