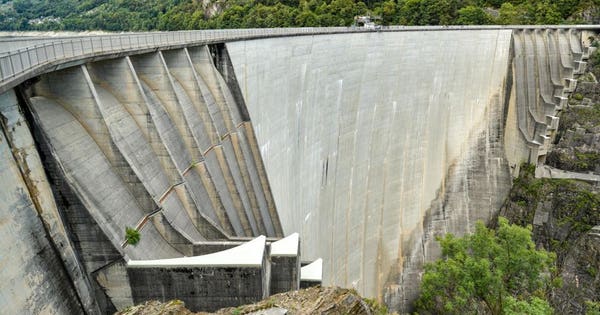 A typical hydroelectric project with a physical dam and water reservoir

A Chilean utility has broken ground on a 50 megawatt-hour (MWh) battery energy storage project – equivalent to the capacity of 5 million iPhones – paired with a run-of-river hydroelectric facility. The battery will be capable of storing electricity produced from the hydro generation without needing to construct a dam or make use of a water reservoir, creating instead a “virtual dam” that can deliver 10 megawatts (MW) of power for 5 hours.

At present, more than 96 percent of the world’s installed energy storage capacity comes from pumped storage.  Able to provide renewable energy exactly when it is needed, these projects usually involve the construction of upper and lower water reservoirs, either with or without accompanying dams.  A turbine sits in between, generating electricity as water flows downhill, with pumps used to push water back uphill to the upper reservoir for storage and later use.

Grid-scale batteries on the other hand use rechargeable lithium-ion technology similar to that found in smartphones and electric cars, aggregated at scale to deliver the same electricity storage capability.  They also allow a hydro facility to generate electricity and to store it for later use, but without the physical infrastructure needed for pumped hydro; hence the term “virtual dam”.

Both batteries and pumped hydro reservoirs serve the same purpose and can be thought of analogously – providing a flexible method of storing energy for later use – allowing electricity to be injected into the electricity grid when it is most needed.

A bold step toward the world’s largest battery

The utility, AES Gener, recently broke ground on the battery project at its 178 MW run-of-river Alfalfal hydroelectric plant, about 30 miles southwest of Santiago.

“Building a physical dam anywhere in Chile is becoming very difficult given growing opposition to this type of infrastructure. The virtual dam can contribute the same benefits without impacting river flows or local communities,” said Ricardo Falu, CEO of AES Gener.

“We analyzed a range of storage options, finally choosing lithium-ion batteries because the technology is scaling exponentially. Lithium-ion batteries came top of our overall assessment when considering all factors, including cost, safety, energy density, charging and discharging rates and overall lifecycle.”

The company is no stranger to either hydro projects or batteries, currently operating over a gigawatt (1,000 MW) of hydro and 52 MW of batteries across Latin America, with a further huge 531 MW hydroelectric complex under construction near Santiago, due online in 2021.

At the groundbreaking, the company also announced plans to develop a second, much larger 250 MW and 1,250 MWh (5 hour) battery, to be integrated with new hydro projects it has under construction.  If and when it is built, this larger virtual dam would join a relatively small club of planned “gigabatteries” – systems in the world with more than 1,000 MWh of capacity.

Currently, Vistra Energy in California has been awarded one of the largest lithium-ion battery projects in the world at 300 MW and 1,200 MWh of capacity. Such a gigabattery would be capable of fully serving the electricity demand of approximately 431,000 Californian households for four hours.   Vistra’s system is due online in 2020, subject to regulatory approvals for U.S. utility Pacific Gas and Electric, which awarded the procurement.

Pumped hydro and hydro dam projects are impressive feats of engineering; large, complex and expensive undertakings that can only be built where the geography is suitably hilly.  They can also have significant environmental impacts. Their construction requires either boring into the earth or pouring large amounts concrete to create reservoirs, and flooding thousands of acres of land – potentially displacing local wildlife and communities.

Switching from pumped hydro to battery storage can therefore make a lot of sense, certainly on environmental grounds. In addition, building a pumped hydro facility can take years; while batteries can be installed in just months. When called upon, hydro facilities can spring into action in seconds, but batteries can respond even faster – in milliseconds.

On economic grounds alone, the market is snowballing toward batteries as technology costs plummet.  Bloomberg New Energy Finance (BNEF) recently predicted that, despite pumped storage’s large head start, it will be overtaken by installed battery storage within the next decade , reaching 200 gigawatts or 200,000 MW installed by 2028.

Deploying energy storage at scale is important to enable increasing levels of renewable energy on the grid.  Renewable energy is already cheaper than conventional alternatives such as coal or gas, and by  2023, industry analysts at Wood Mackenzie say solar will be cheaper than fossil fuels “virtually everywhere.” However, wind and solar are variable in their output, not always generating electricity when it is needed.

Hydro – and in particular run-of-the-river projects that don’t have a reservoir of water stored up – may be less variable than wind and solar on a moment-by-moment basis, but such projects are still subject to seasonal fluctuations in output, which can affect reliability.

All of these trends come to bear at the new plant in Chile. If the virtual dam at Alfalfal proves successful and replicable, more hydro plants could be paired with storage to provide enhanced flexibility and stability to the grid, delivering power when and where it is needed.

BNEF recently issued a significant increase in its forecast for global deployment of behind-the-meter and grid-scale batteries, stating that the global energy storage market is now expected to attract $620 billion in investment over the next 22 years.

Logan Goldie-Scot, head of Energy Storage at BNEF, is bullish.

“The sheer investment and scale of the industry … is a very powerful force,” he said in a recent interview with This Week In Cleantech.  “Those who have bet against technology cost reductions in the past have typically been shown to be cowards.”