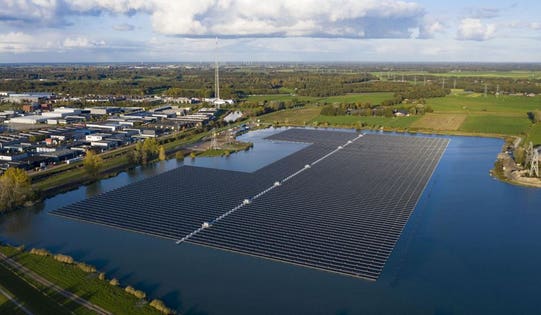 Floating solar power plants are what the name suggests, solar panels mounted on a structure that floats on a body of water.  The construction process can take up some time, but now the Sekdoorn floating solar farm in the Netherlands is completed after a record six weeks of work. It is the fastest construction speed ever for the German company specialised in the renewables sector BayWa r.e., who worked together with its Dutch partner GroenLeven to build the power plant.

The solar farm will have a yearly energy yield of 13.330 MWh, saving around 6,500 tons of CO2 emissions a year and powering the equivalent of 4,000 households.

The advantage of floating solar farms is that they reduce land requirements because they can be installed in industrial pools, drinking water reservoirs and small lakes.

According to the World Bank, 10% of man-made freshwater reservoirs in Europe has the potential to produce over 200 GWp if floating panels were installed.

The Sekdoorn project is the biggest floating solar installation in the Netherlands and the second biggest in Europe to date, following O’MEGA1 project in France. It is the third of its kind for BayWa r.e, after the completion of the plants in Weperpolder and Tynaarlo.

“We are proud of having brought online three major projects in a very short period of time,” said Benedikt Ortmann, Global Director Solar Projects at BayWa r.e. “As there hasn’t been any reliable system in the market to meet our quality standards, we have developed a completely new design. With this standardized system we are able to build floating photovoltaic plants way faster than ground-mounted solar installations.”

The typical problems with floating solar farms are improvised cabling, improper anchoring, no water movement under the system and non-existing or insufficient quality of walkways. So BayWa r.e transferred their system design for ground-mounted installations onto the water and developed its own scheme for the installation of photovoltaics on water surfaces.

Ortmann said that their focus is making sure the installation has a high durability and long lifetime. “Key is, the longer the system produces energy, the lower the costs of energy production,” he added. “Apart from that, the system guarantees low operations and maintenance costs as well as a minimal impact on the maritime life.”

Floating solar is expected to follow a similarly fast and upward trajectory as solar power. “In Belgium, the Flemish government in January 2019 announced six floating photovoltaic projects totaling 11.1 MW. In Portugal, there are plans for a hybrid hydro-solar project which involves installing floating solar panels on a reservoir to supplement an existing hydro plant,” said the Chief Executive Officer of SolarPower Europe, Walburga Hemetsberger. “There is a terawatt-scale opportunity for floating solar projects and we are confident that in the coming years many projects will arrive.”

The Sekdoorn plant is planned to be fully connected to the grid and operative in the first six months of 2020.

BayWa r.e is planning the construction of other floating solar farm in the Netherlands next year, including a 27.3 MWp installation that will be the largest in Europe.