Why Global Citizens Should Care
Ending hunger by 2030 is the second United Nations’ Global Global, which is becoming seems increasingly out of reach as food insecurity rises. These youth activists are working to make nutrition a core development priority. You can join us in taking action on this issue here.

It’s not a cure-all for the many humanitarian problems that affect the world, but it is key to any holistic approach to development. What’s more, there’s more than enough food being produced around the world every year to make this intervention possible.

Yet the number of hungry, malnourished, and undernourished people worldwide is rising, jeopardizing progress on the United Nations’ Global Goals.

A multi-year drought has caused widespread crop failures in Kenya. The supercharged Cyclone Idai destroyed millions of acres of farmland in Southern Africa earlier this year. Rising temperatures are making it harder to grow popular crops like avocados and coffee, while also empowering pests that devour farmland. And rising sea levels in Southeast Asia are flooding rice fields with saltwater.

To make matters worse, conflicts are disrupting the ability of farmers to grow crops; more than a third of all food produced globally is wasted; and farmland is too often set aside for cash crops rather than nutritionally dense crops.

Despite these trends, hunger isn’t inevitable in the future. Governments, civil society, and corporations can develop and fund policies that prioritize nutrition, improve agriculture and food distribution, and safeguard communities from climate change.

A growing generation of youth leaders has emerged to make sure these goals are achieved. They’re calling for nutrition to become a central focus of all development projects and insist that access to quality food is a human right.

Here are three food and nutrition advocates whose work you should definitely know about. 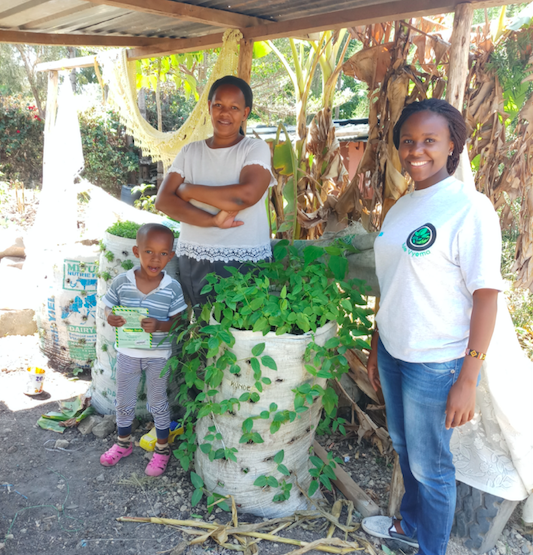 Marureen Muketha, right, with woman who is practicing sack farming.

Although women plant, tend to, and harvest a significant amount of the crops grown in Kajiado County in Kenya, they generally don’t control what happens to the food on its way from the farm to table.

That’s because men own the vast majority of land in Kenya. After women grow the crops, men decide if the plants are retained for household sustenance or sold at the market for income; and if they’re sold, men decide what happens to the money that’s earned.

In fact, adolescent girls aged 15-19 are the most malnourished demographic in the country, and anemia is widespread in pregnant women and children because of a lack of access to iron-rich foods.

Muketha has a degree in nutrition studies from Jomo Kenyatta University of Agriculture and Technology. She applies the knowledge she gained at university by holding nutrition workshops in the town of Kiserian in Kajiado County, where she teaches women about micronutrients, how to prevent anemia, and the importance of a diverse diet. 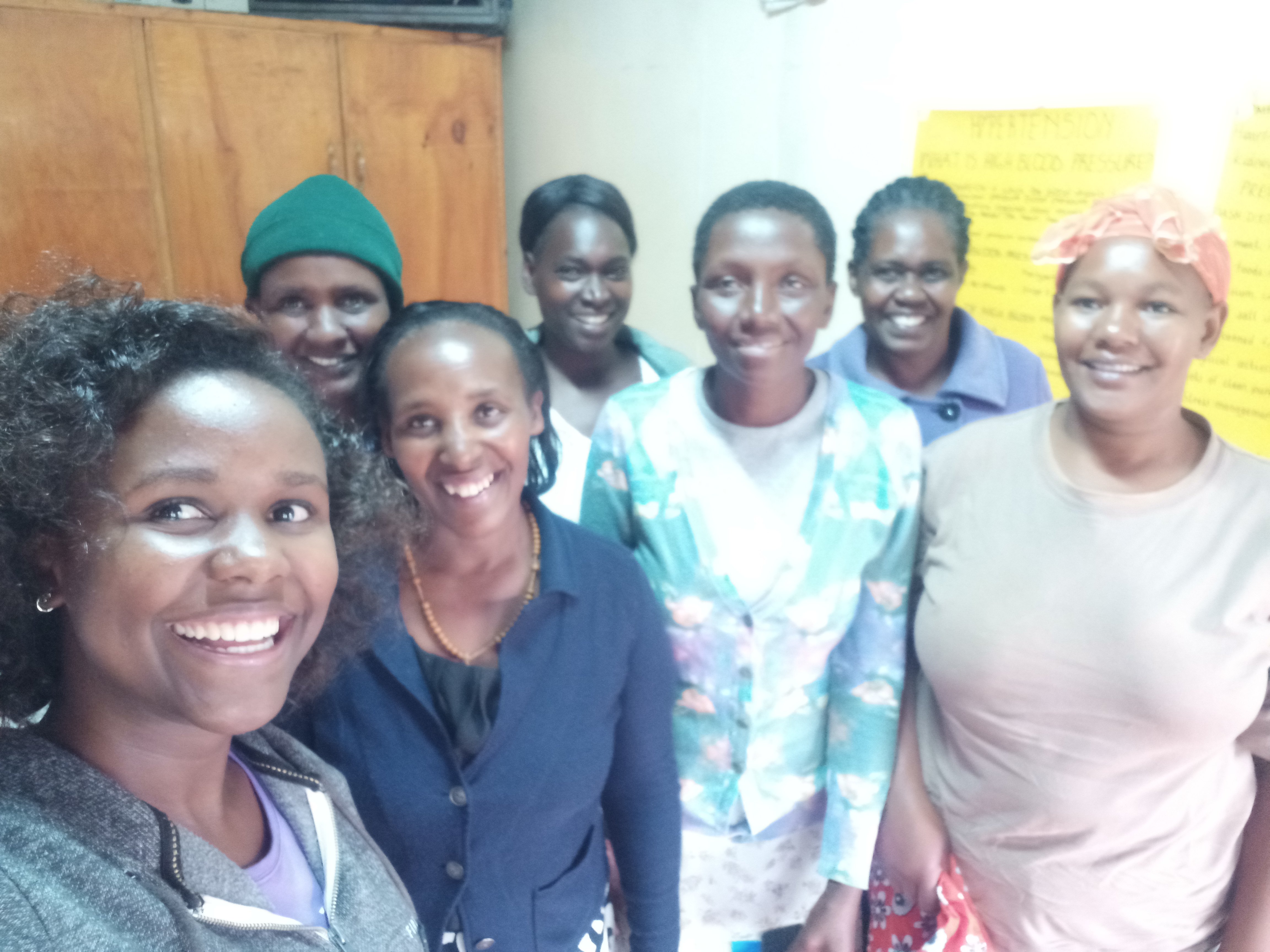 “The woman is the one who is in charge of the kitchen so once she appreciates how diet is important in terms of immunity and prevention of lifestyle diseases, she will be able to practice that when she goes home,” she said.

Muketha is also trying to transform how food is produced in the country through a nonprofit she created called Tule Vyema, which means “let’s eat right” in Swahili.

In recent years, an increasing amount of farmland in Kenya has been dedicated to cash crops like tea and kaat, a narcotic plant that people chew for pleasure. As a result, indigenous crops that have high nutritional value have become less common and more expensive.

“This affects nutrition because there’s very little supply of food,” Muketha said, adding that when people have little option in what to buy, they often end up with highly processed, low nutrition foods.

After women attend Muketha’s workshops, she teaches them about sack farming, a highly efficient type of farming that allows women to take advantage of the small plots of garden space that are available to them in front of their homes.

Sack farming gives women a measure of control over food production. Instead of cash crops, Mukethe encourages women to cultivate indigenous crops — including amaranth, African Nightshade, and cowpeas — that are rich in nutrients and thrive in local weather conditions. 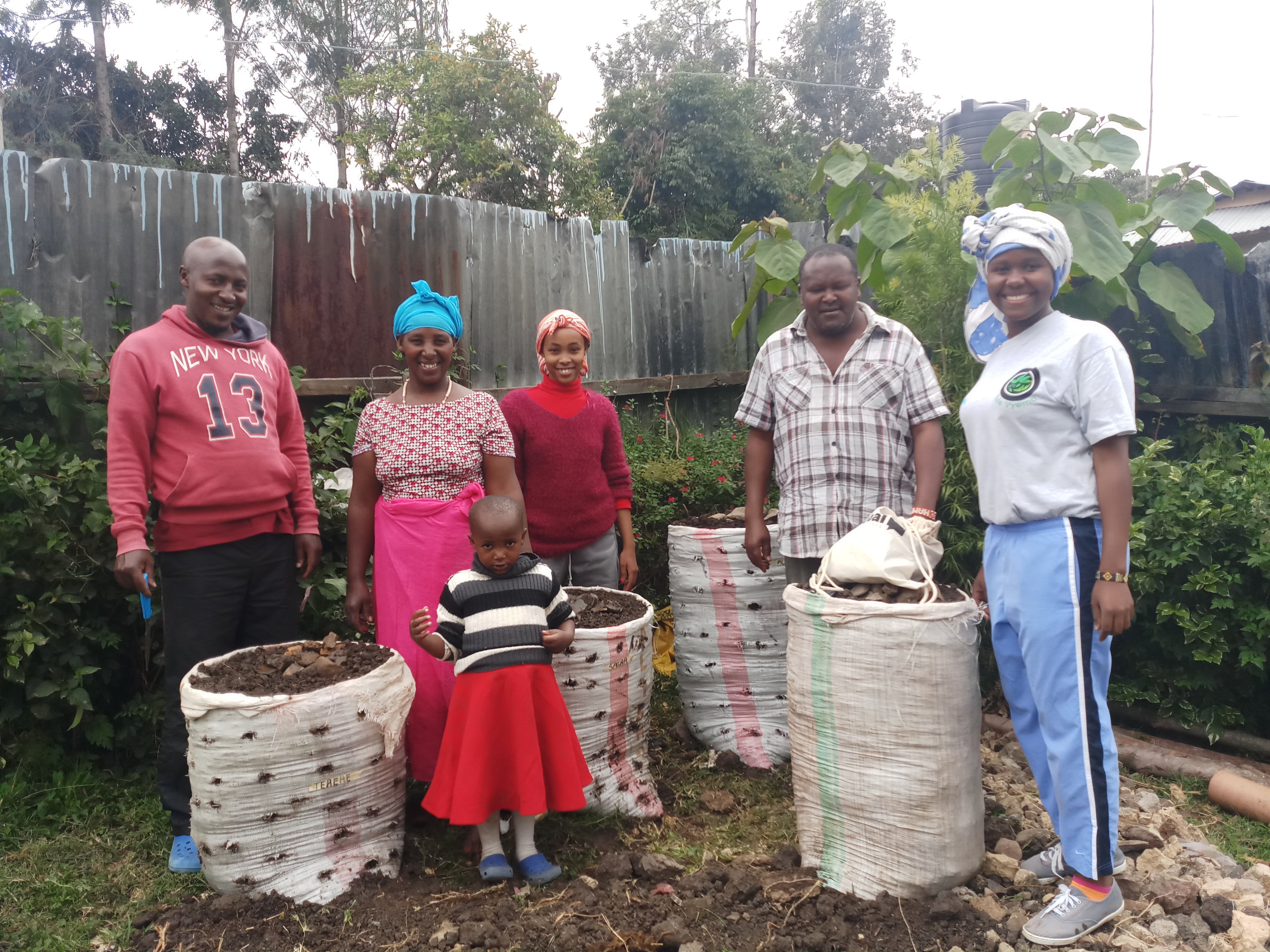 While most of the crops grown using this method are used to supplement diets and provide key nutrients, women are able to sell surplus at the market to earn some money — that can be used to pay school fees and medical bills.

Sack farming has created a miniature movement in Kiserian. Muketha has helped 420 households gain greater food security so far and many women who pick up sack farming become evangelists of the method, teaching others about nutrition and the value of indigenous vegetables.

Muketha views nutrition through the larger frame of health. In addition to improving diets, Tule Vyema also deworms communities and teaches the value of hygiene to protect people from infectious diseases.

She ultimately wants to expand to other counties in Kenya and even beyond the country’s borders.

Right now, she’s trying to help women who live in rented properties who might not be able to farm the land in front of their houses. Leasing land might be the only way to get around this problem, but that’s a route that would give Tule Vyema much greater agricultural capacity.

“We will not leave out a woman who wants to be part of the project,” she said.

More than a quarter of children in Zimbabwe are stunted, which is when a child under the age of five becomes mentally or physically handicapped because of a lack of nutrition.

For Webster Makombe, a nutrition activist with Scaling Up Nutrition and law student in Harare, Zimbabwe, stunting is an injustice that reflects misguided agricultural and health policies and a lack of nutrition awareness throughout the country.

That’s why he’s tackling the problem from two angles. First, he’s trying to make nutrition a top government priority by attending forums and meeting with officials and sounding the alarm on stunting.

He told Global Citizen that the government should create a department focused exclusively on nutrition to ensure that the most vulnerable populations aren’t suffering from diet-related health problems. Right now, nutrition gets overlooked, he said, which results in government policies that are well-meaning but ineffective.

“There’s a problem where people mistake food security for nutrition,” he said. “There’s plenty of maize, but the government is feeding children maize for one meal, then another meal. They’re pumping carbs into children.”

“We need a variety of crops to be grown to foster nutrition,” he said.

Makombe said that a range of other problems from school performance to health outcomes can be addressed by improving nutrition rates.

“Nutrition is a key driving force when it comes to economic development,” he said.

Changing government policy is difficult when you’re a college student, so Makombe’s second angle of action is through community activism.

He hosts community nutrition workshops throughout Zimbabwe, where he informs people about the risk of stunting and other health problems that stem from malnutrition.

“Malnutrition is different from hunger,” he said. “People definitely know when their stomach is hungry, but if someone is eating and you tell them it’s not good for them, they might be skeptical.”

“But malnutrition is real and it’s something that has to be looked at,” he added.

Sophie Healy Thow got launched into the international nutrition space when she was just 15 — when her science project on how to make faster-growing and higher-yielding crops won the 2014 Google Science Prize.

Since then, she’s traveled from her home in Cork, Ireland, to give a Ted Talk, attend international conferences, and participate in the Paris climate agreement. She’s one of the youngest members of Scaling Up Nutrition (SUN), a global network of nutrition experts and advocates aiming to end undernutrition, micronutrient deficiencies, and obesity. Healy-Thow also co-founded the nonprofit Agrikua to empower female farmers.

Hear from our co-founder @SophieHealyThow :: How her passion for #womenempowerment and #youthvoice in politics and development took her to #GlobalGoals stages pic.twitter.com/4uZmqpIHGA

Through all of her appearances, she’s been trying to elevate the status of nutrition in international development. She’s particularly committed to raising awareness of how climate change affects food security.

“Malnutrition is one of the biggest issues of our time,” she told Global Citizen. “And it’s something that’s preventable. It’s not like we don’t have enough food in the world; we have enough food to feed everyone twice over.”

“Nutrition and climate change are connected, but within the climate action movement, nutrition is being left behind,” she said.

“Climate change is completely disrupting our food system,” she said. “Disasters are displacing people, the majority of farmers in Sub-Saharan Africa, especially women under the age of 50, have seen severe crop failures.”

Healy-Thow said that nutrition is an issue that affects every country — from the college students in Ireland who can’t afford their next meal to the female farmers in Kenya who don’t have access to nutritious vegetables — and could unite activists around the world.

Youth activists, in particular, have the power to create a movement around nutrition — but only if their voices are incorporated in decision-making processes.

“Young people need to be represented and listened to at high-level meetings,” said Healy-Thow. “No more can the future generation be added in at the very last minute, they need to be at the core of program planning and management, because thinking about them at the last minute and pushing them in the room, isn’t good enough, they need to be co-creators with heads of state.”