Why Global Citizens Should Care
From devastating natural disasters to citizens fighting for what they believe in, these photos show why it’s more important than ever to commit to achieving the Global Goals. You can join us in taking action here.

Natural disasters struck many communities across the world this week. In South Asia, heavy rains caused landslides and flooding — according to CNN, at least 227 people have died since the flash floods took place, affecting Nepal, India, Bangladesh, and Pakistan. The flooding has also caused massive damage to the infrastructures in these countries, including collapsed bridges and buildings.

Hurricane Barry, a Category 1 hurricane, also made its way to Louisiana, forcing 300 people to take refuge in shelters.

A new policy rolled out in the US by the current administration on Monday bars most immigrants from a long-standing practice of applying for asylum at the US-Mexico border. According to the new policy, people seeking asylum must instead apply for protection in the countries they passed through to enter the United States. Legal experts argue that the policy violates both domestic and international law.

The World Health Organization officially declared the Ebola epidemic in the Democratic Republic of Congo as a global health emergency after the death toll increased to 1,600 people in eastern Congo.

Touching on these issues and more, here are some of the most striking images from around the world this week. 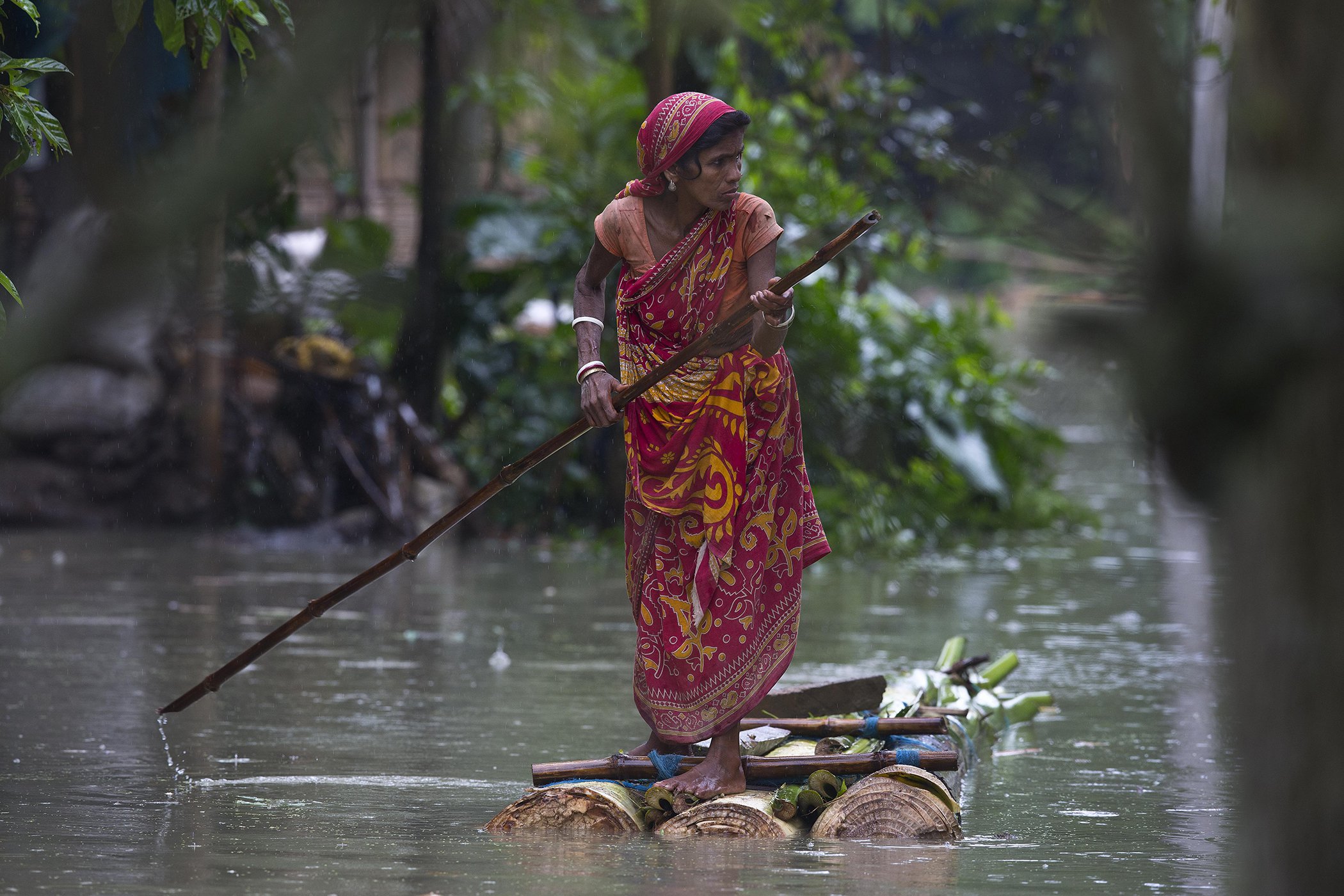 1. Flooding in South Asia: An Indian woman rows a makeshift banana raft through flood waters in Burgaon, east of Gauhati, Assam, India, July 15, 2019. Floods and landslides caused by monsoon rains have created a rapidly escalating humanitarian crisis in Nepal, India, and Bangladesh. According to CNN, more than 200 people have been killed by the unfolding natural disaster in Nepal, India, and Bangladesh and the extensive damage to infrastructure, including blocked roads and compromised bridges, amid the ongoing rains means that many more people are at risk in the days ahead. Powerful monsoon rains occur each year between June and September in South Asia and often cause severe damage to towns and cities, but some scientists argue that climate change is worsening the annual monsoon season by destabilizing global precipitation patterns. 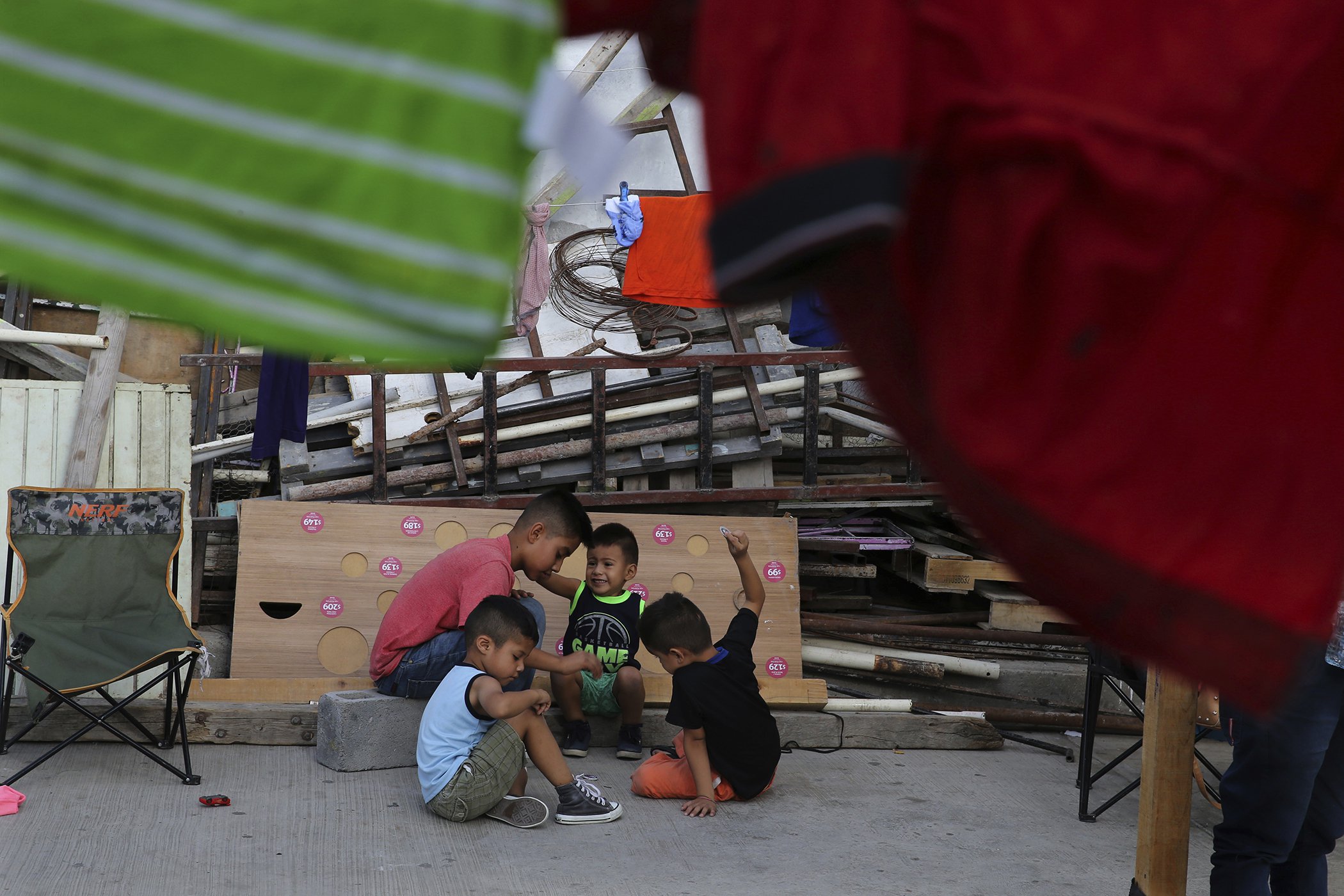 2. Immigration and the United States: Migrant children play at the AMAR migrant shelter in Nuevo Laredo, Mexico, July 17, 2019. Amid a chaos of rumors, confusion and fear, asylum-seekers grappled to understand what a new US policy that all but eliminates refugee claims by Central Americans and many others meant for their bids to find a better life in America. Legal experts and human rights advocates claimed the Trump administration’s new asylum rule violates both domestic and international law. Critics say the rule, which requires asylum seekers to first apply for asylum in another country before being able to make a case in the United States, circumvents Congress and abdicates the Geneva Convention. 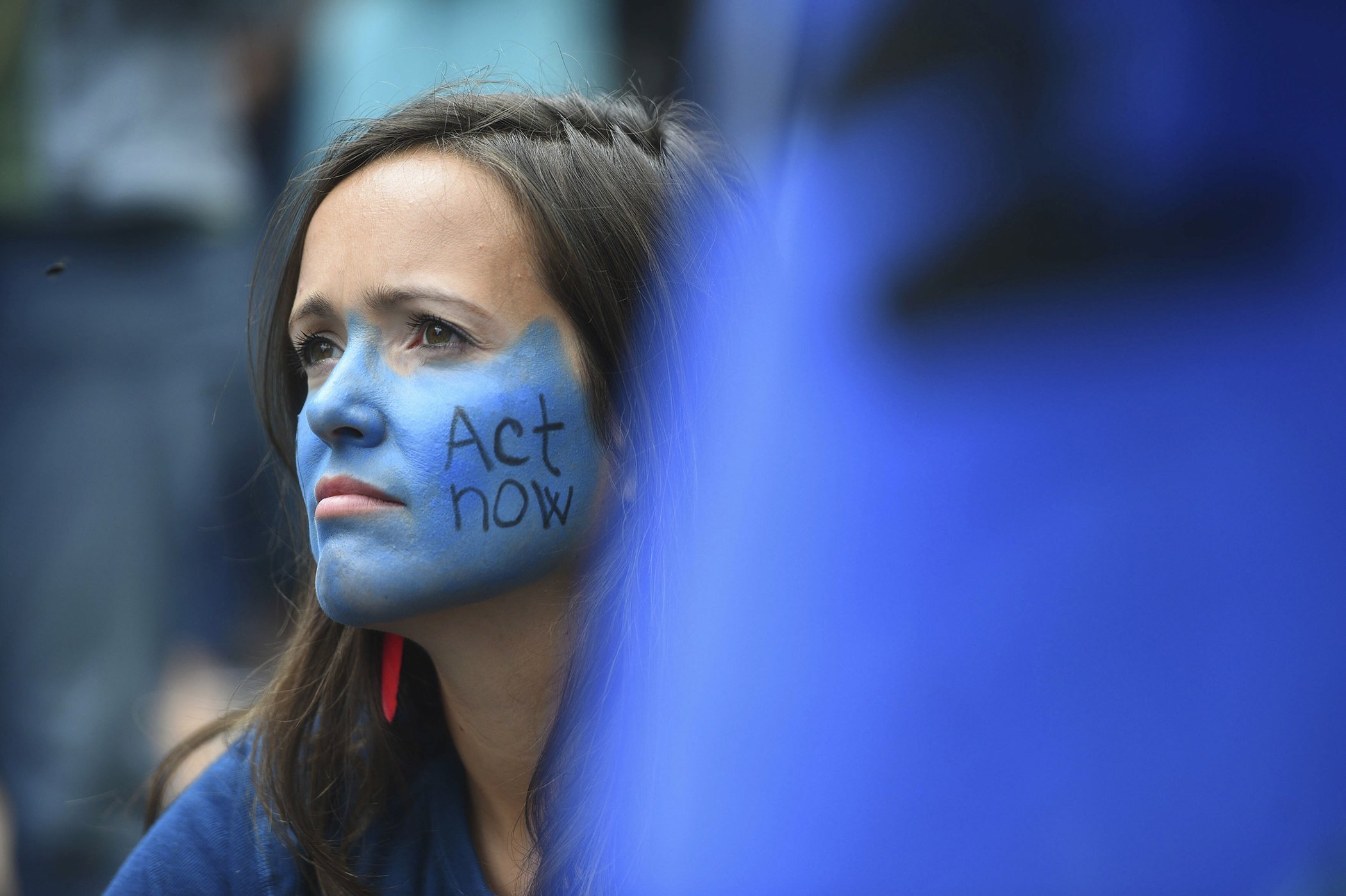 3. Climate Protests: Protesters from from the environmental pressure group Extinction Rebellion demonstrate outside the Royal Courts of Justice in London July 15, 2019.  Environmental campaigners are blocking some roads across the UK on Monday, as they protest against what they allege is inaction on climate change.

4. All Female Orchestra: Members of Afghanistan’s first all-female orchestra Zohra get ready for their performance in downtown of Bratislava, Slovakia on July 16, 2019. The members of the ensemble are one of the first women in their families and throughout the country to study music in the past 30 years and they often have to deal with various threats.

5. Daily Life in Afghanistan: Afghan schoolgirls walk along a street on the outskirts of Mazar-i-Sharif on July 15, 2019. 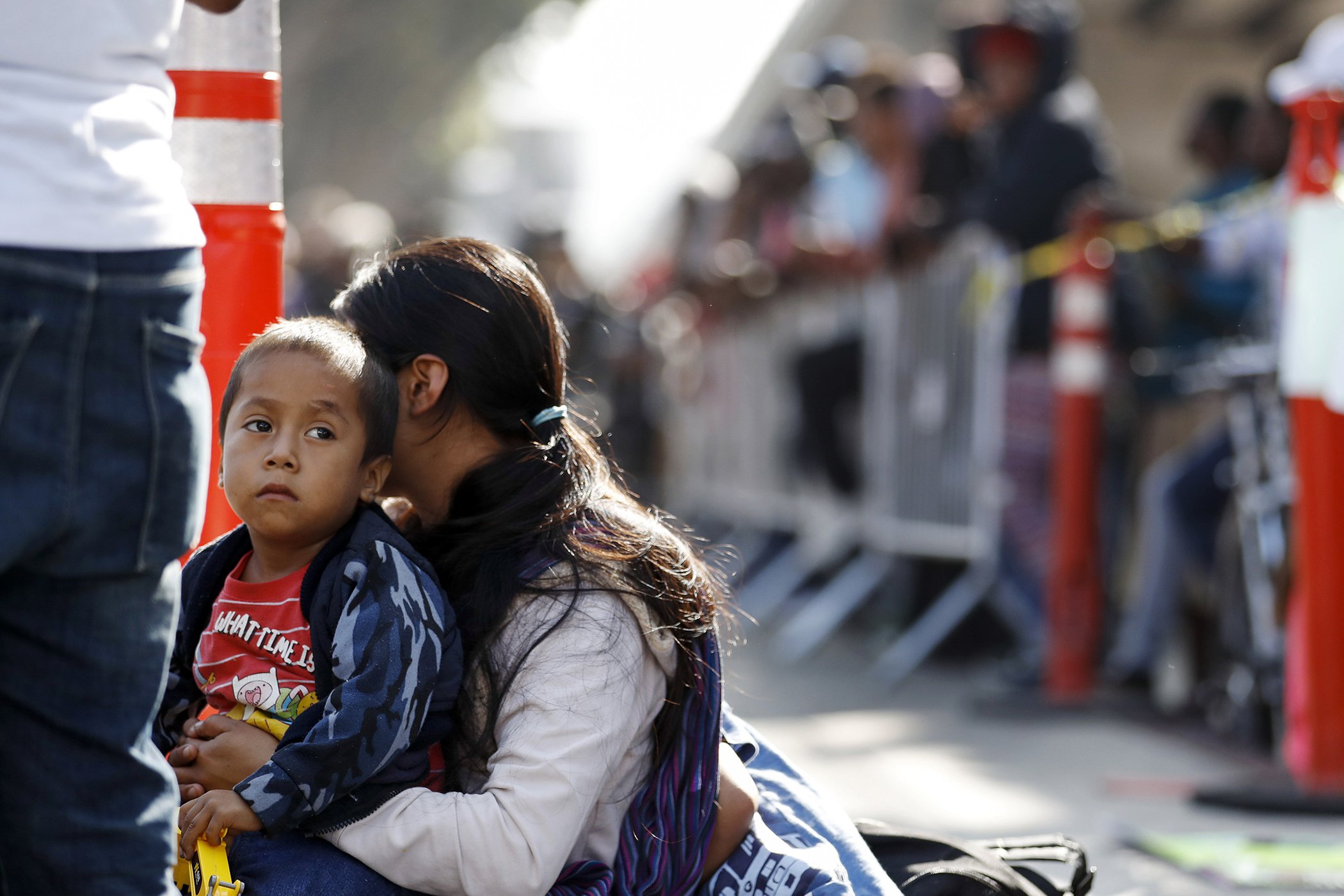 6. US Immigration Policy: A woman sits with her sons as they wait to apply for asylum in the United States along the border, July 16, 2019, in Tijuana, Mexico. Dozens of immigrants lined up Tuesday at a major Mexico border crossing, waiting to learn how the Trump administration’s plans to end most asylum protections would affect their hopes of taking refuge in the United States. The Trump administration’s new asylum rule violates both domestic and international law, legal experts and human rights advocates say. Critics say the rule, which requires asylum seekers to first apply for asylum in another country before being able to make a case in the United States, circumvents Congress and abdicates the Geneva Convention. 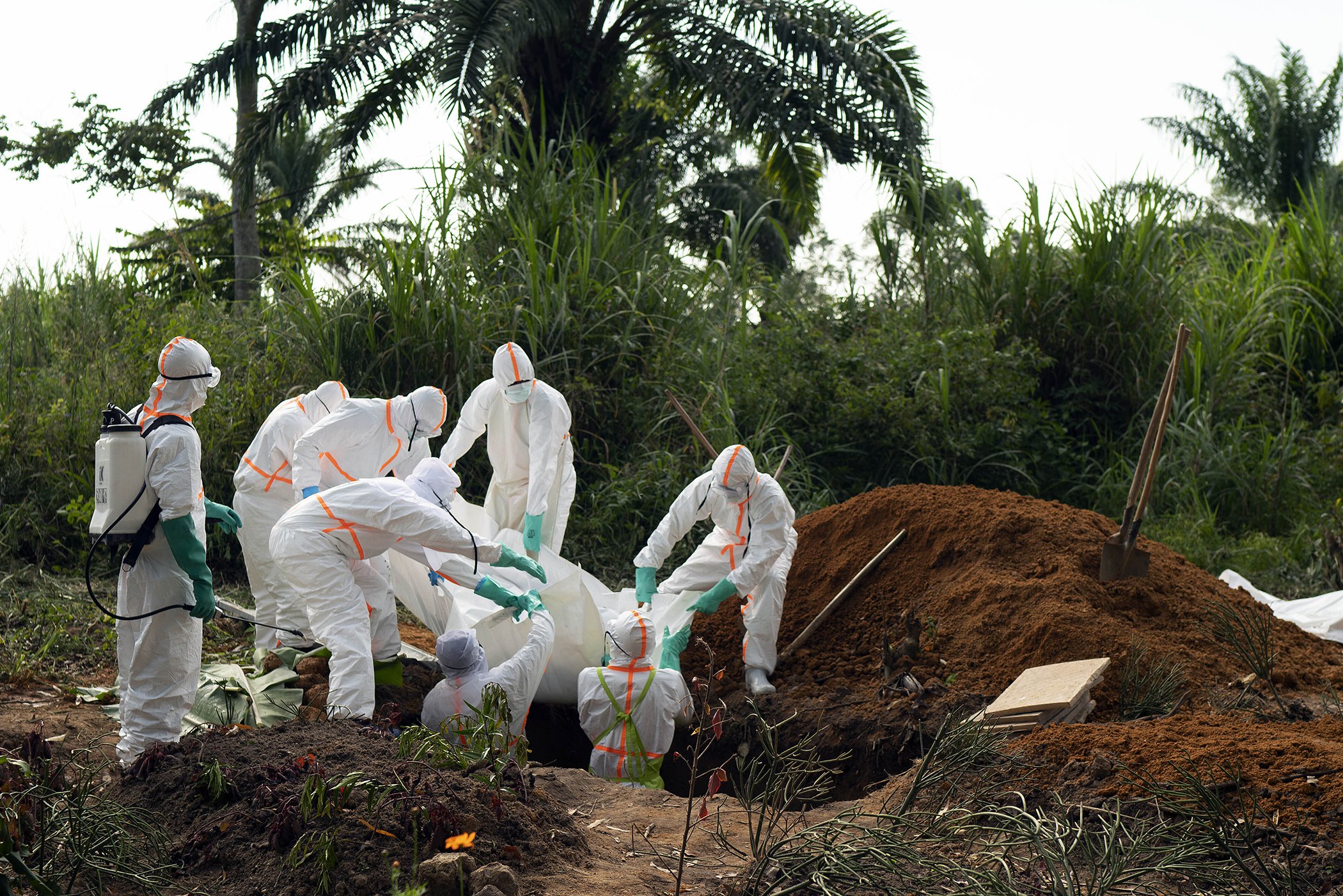 7. Ebola in the Congo: An Ebola victim is put to rest at the Muslim cemetery in Beni, Democratic Republic of the Congo (DRC) on July 14, 2019. After learning that the disease spread to eastern Congo’s biggest city, Goma, the World Health Organization formally declared the Ebola epidemic in the DRC a global health emergency this week. More than 1,600 people in eastern Congo have died as the virus has spread in areas too dangerous for health teams to access.

8. Access to Water in India: An Indian laborer takes a shower in the old quarters of New Delhi on July 14, 2019. 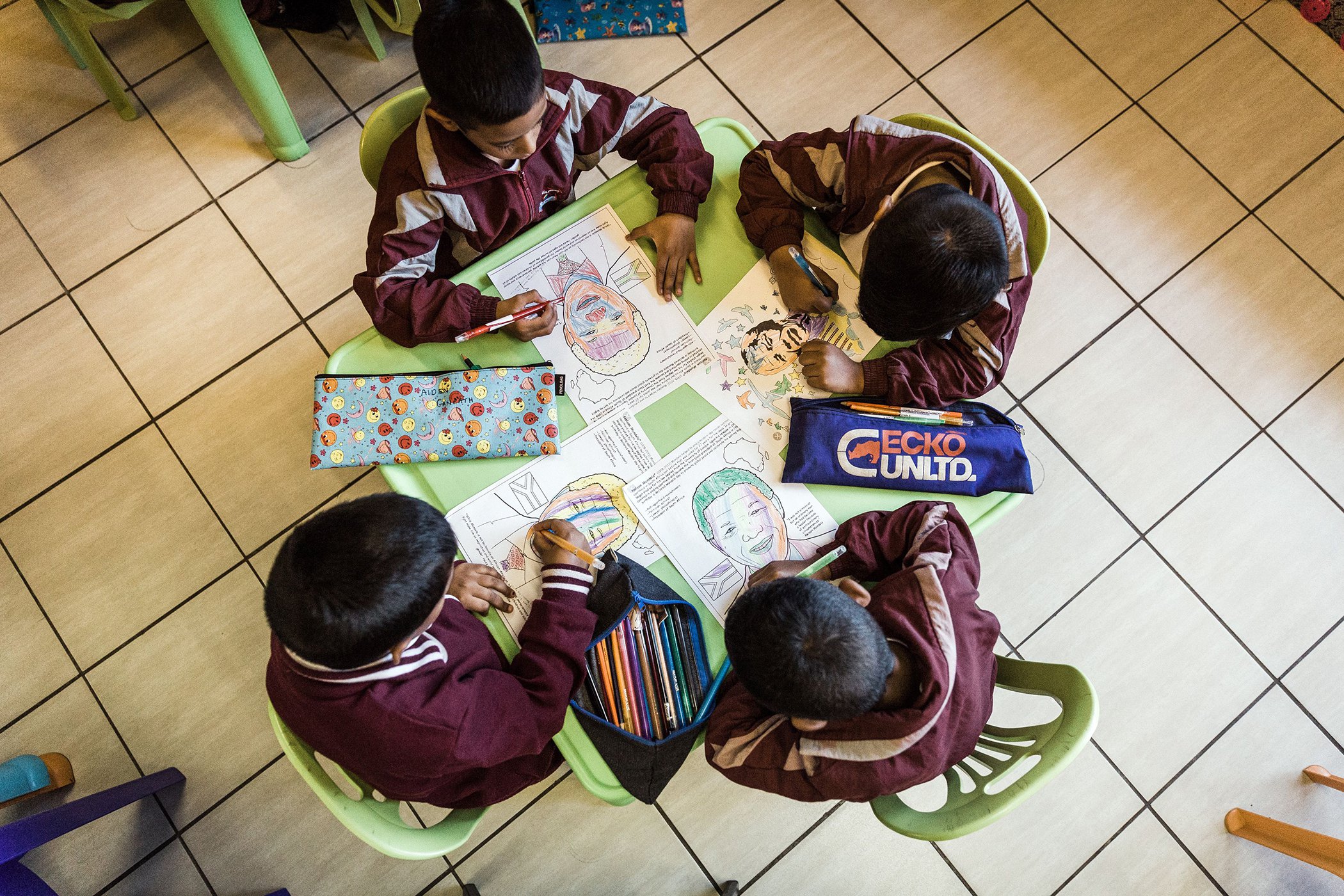 9. Mandela Day in South Africa: Students from Northlen Primary school color drawings of former president Nelson Mandela as they mark his birthday on July 18, 2019 in Durban, South Africa. Nelson Mandela, who was born 101 years ago on July 18, spent 67 years of his life fighting for social justice and freedom for all people, first starting to campaign for human rights in 1942. His selfless leadership inspired other leaders and citizens to work together in an effort to make the world a more equal and just place. Mandela Day, which is celebrated annually on Madiba’s birthday July 18, is a global call to action that reminds us of our individual power to impact change.

10. Flooding in South Asia: An Indian girl carries drinking water as she wades through flood waters at Pabhokathi village in Morigaon district of India’s Assam state on July 15, 2019. Floods and landslides caused by the annual deluge have wreaked deadly havoc from the Himalayan foothills to low-lying camps housing Rohingya refugees, with officials warning tolls could rise as they scramble to reach affected communities.

11. Heat Wave in Gaza Strip: Palestinian children play with water in a slum on the outskirts of the Khan Yunis refugee camp, in the southern Gaza Strip on July 17, 2019, during a heat wave.

12. Yazidi in Iraq: Two elderly Iraqi Yazidi women are pictured in the town of Sheikhan, northeast of Mosul, on July 16, 2019. Of the 550,000 Yazidis in Iraq before the Islamic State (IS) group invaded their region in 2014, around 100,000 have emigrated abroad and 360,000 remain internally displaced. Roughly 3,300 Yazidis have returned from IS captivity in the last five years, only 10 percent of them men.

14. Tropical Storm Barry: Water recedes from around a fish camp following Hurricane Barry on July 14, 2019 in Wilkerson Bayou, Louisiana. The storm, which made landfall this week as a category one hurricane near Morgan City, caused far less damage than had been predicted but bands of rain and thunderstorms continue to soak the area and cause flash-flood concerns. Wilkerson Bayou is a small village near Myrtle Grove, made up of fish camps and accessible only by boat.