Why Global Citizens Should Care
From human rights violations to environmental activism, these pictures show why we should commit to achieving Global Goals. Join the movement by taking action here.

People around the world celebrated various events this week by engaging in religious festivities and commemorating important historical fleets.

Eid al-Fitr marked the end of Ramadan, a month-long fasting period for Muslims, during which they abstain from eating, drinking, smoking, and sex from sunrise to sunset. Muslims celebrate the holiday with family and friends engaging in collective worship and feasting. But feasting and praying may not be as grand everywhere.

Displaced residents in Marawi, Philippines, offered their Eid prayers in makeshift tents and shelters for the second consecutive year.

An armed conflict between government forces and pro-ISIS militants in May 2017 forced 200,000 Marawi residents to flee. A United Nations report highlights that the clash caused severe food shortages and forcibly displaced 98% of the population along with residents from neighboring municipalities.

Many world leaders gathered in Normandy, France, to celebrate the 75th anniversary of D-Day and pay tribute to the Allied Troops that defeated Adolf Hitler’s Third Reich and freed France from the reign of the Nazis.

French President Macron and US President Donald Trump praised all those who made the victory possible. Macron expressed gratitude towards the US, one of its most important allies during the war, for helping achieve the fleet. “We know what we owe to you, veterans, our freedom. On behalf of my nation I just want to say ‘thank you,’” he said.

This year also marks the 30th anniversary of the pro-democracy protests held at Tiananmen Square in Beijing, China, which led to a government crackdown that killed hundreds of protestors.

More than 180,000 people gathered in Hong Kong’s Victoria park to participate in the annual candlelight vigil to honor the lives of the activists who died during the protests that lasted for six weeks, largest in China’s communist history.

On June 3, 1989, several tanks and troops opened fire on unarmed protestors killing and injuring many people. The exact number of casualties is still withheld but believed to be few several hundred to several thousand.

In the US, a group of young people have filed a lawsuit accusing the government of upholding energy policies that threatens their future and livelihood. The group is rallying to end the use of fossil fuel by claiming that the government is directly violating the group’s Fifth Amendment rights to life, liberty and property.

These are this week’s most striking photos. 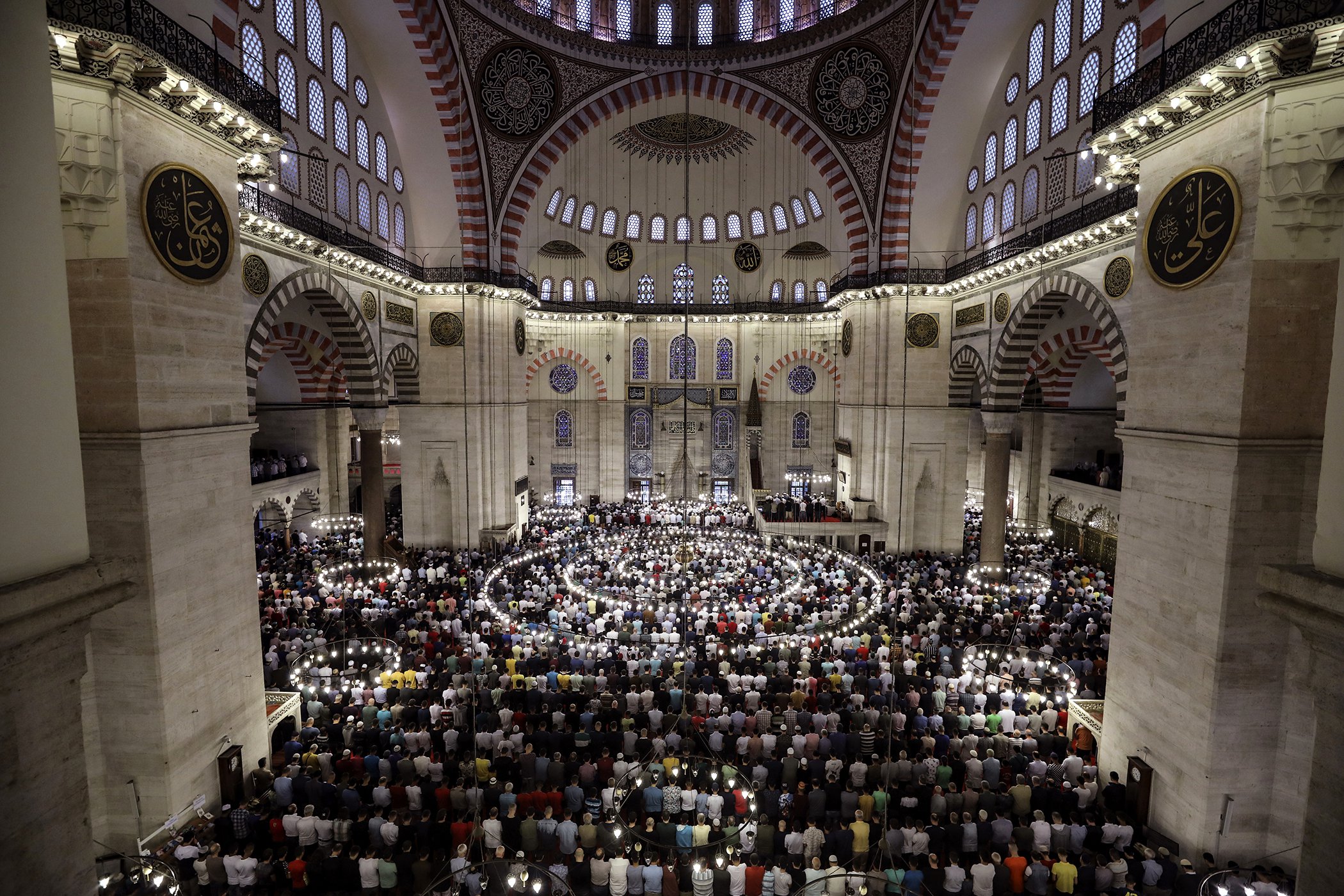 1. Eid al-Fitr in Turkey: Turkey’s Muslims offer prayers during the first day of Eid al-Fitr, which marks the end of the holy fasting month of Ramadan at the Suleymaniye Mosque in Istanbul, June 4, 2019. For the past month, Muslims around the world were observing Ramadan, refraining from eating, drinking, smoking, and sex from sunrise to sunset.

2. Tiananmen Square Anniversary: A man holds a candle during a candlelight vigil at Victoria Park in Hong Kong on June 4, 2019, to mark the 30th anniversary of the 1989 Tiananmen crackdown in Beijing. Large crowds turned out for a mass candlelight vigil in Hong Kong on June 4 evening marking 30 years since China’s bloody Tiananmen crackdown, a gathering tinged with symbolism as the city struggles to preserve its own cherished freedoms. 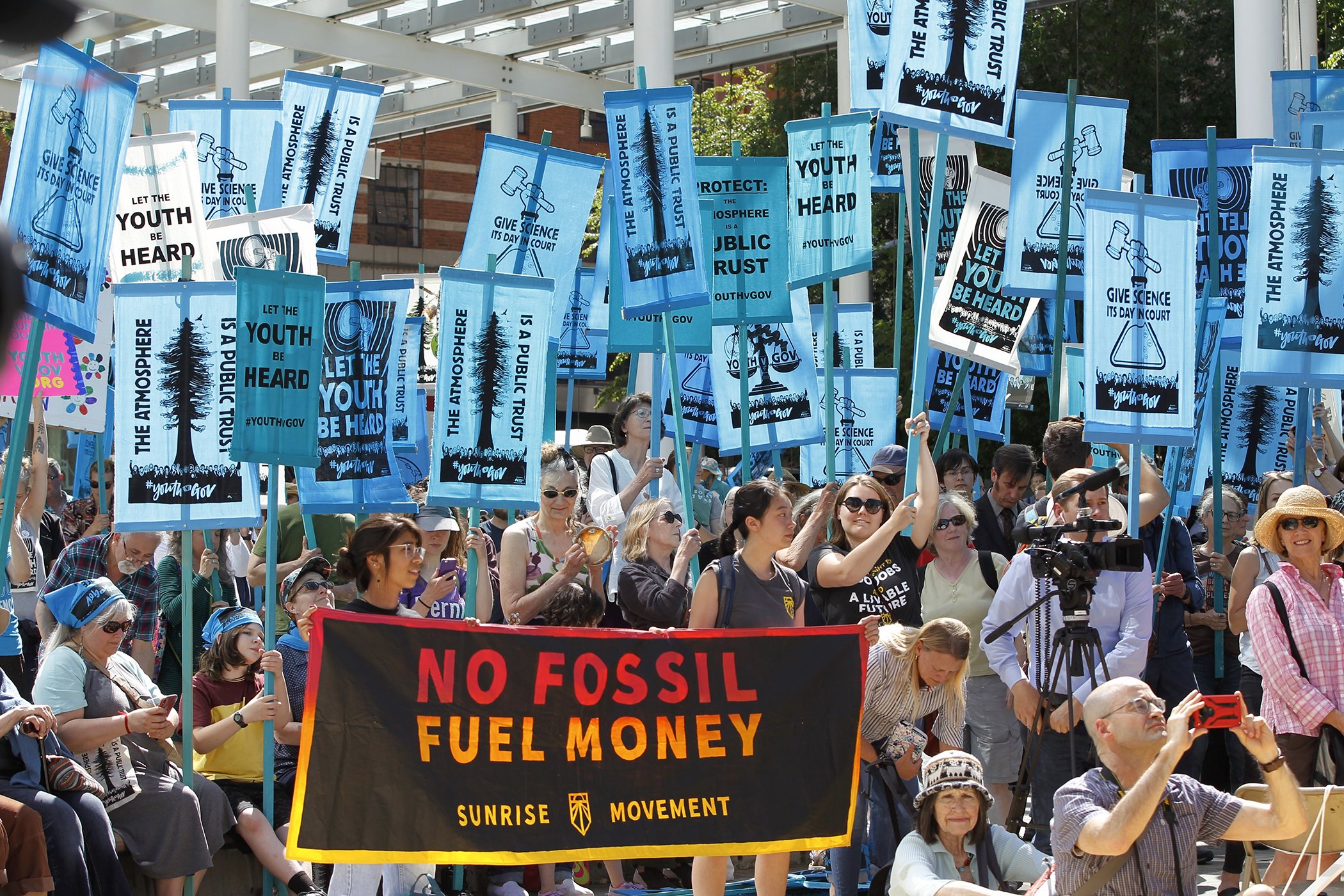 3. Climate Change Legal Battle: Supporters attend a rally for a group of young people who filed a lawsuit saying US energy policies are causing climate change and hurting their future. The group faced a major hurdle Tuesday as lawyers for the Trump administration argued to stop the case from moving forward, in Portland, Ore., June 4, 2019. The young people involved in the lawsuit are looking to press the government to stop the use of fossil fuels, claiming that the use of coal and oil is a violation of the young people Fifth Amendment rights to life, liberty, and property. According to the AP, the lawsuit says that the youth are more vulnerable to the effects of climate change, a claim that the American Academy of Pediatrics, 14 other health organizations, and nearly 80 scientists and doctors agreed with in documents filed to the appeals court. 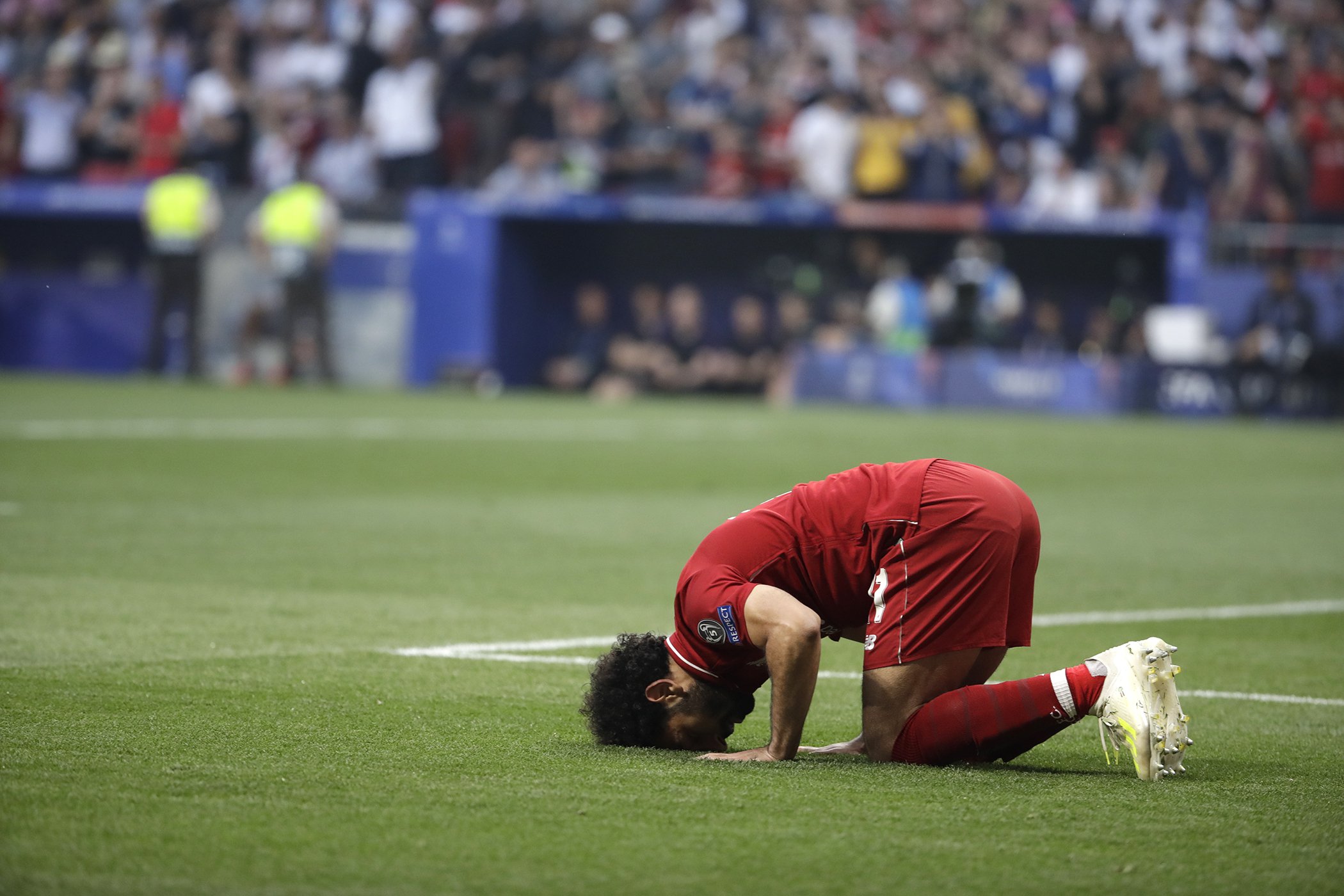 4. Champions League Final: Liverpool’s Mohamed Salah celebrates after scoring his team’s opening goal during the UEFA Champions League Final between Tottenham Hotspur and Liverpool at the Wanda Metropolitano Stadium in Madrid on June 1, 2019. Liverpool beat Tottenham 2-0, claiming their sixth European title. Salah is one of the world’s most famous footballers, and he happens to be Muslim. Whenever Salah scores, he kneels down and performs his trademark sujood — a show of subservience to god — in celebration the goal. His immense popularity has seemingly led to an unexpected result: reports of Islamophobic hate crimes have fallen since he joined Liverpool. An academic paper from Stanford University’s Immigration Policy Lab researched whether Salah’s faith had influenced Islamophobia in Merseyside, the British county home to Liverpool Football Club. The paper, published on May 30, surveyed 8,060 Liverpool supporters, investigated 936 hate crimes from 25 police departments in the region, and examined 15 million tweets sent from football fans in the UK since Salah signed with the club. The results were positive: a 18.9% drop in hate crimes — while anti-Muslim tweets fell by half, from 7.2% 3.4%. “The survey experiment suggests that these results may be driven by increased familiarity with Islam,” the paper stated. “These findings suggest that positive exposure to outgroup celebrities can reveal new and humanizing information about the group at large, reducing prejudiced attitudes and behaviors.” 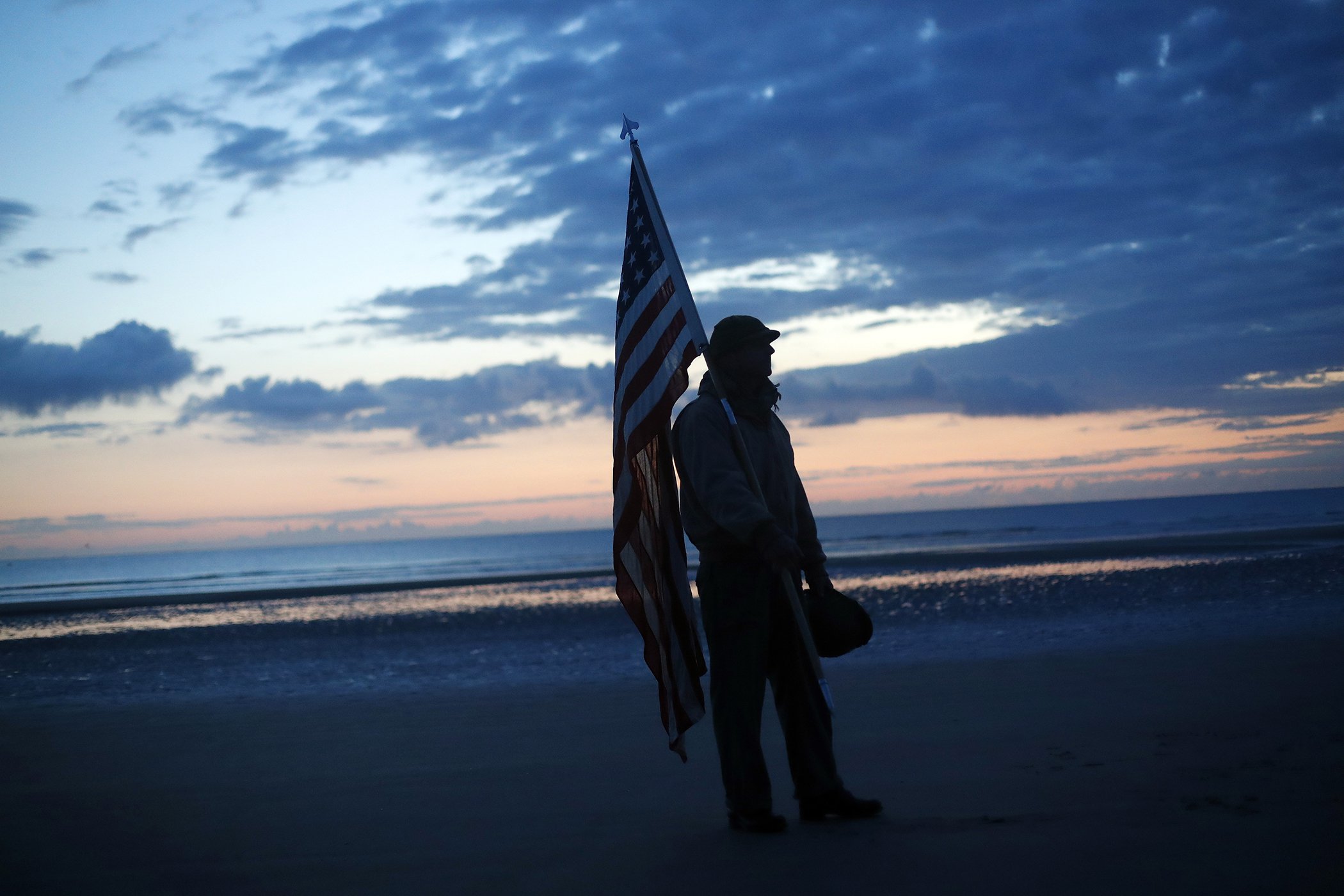 6. 75th Anniversary of D-Day: Udo Hartung from Frankfurt, Germany, a World War II reenactor holds the U.S. flag as he stands at dawn on Omaha Beach, in Normandy, France, Thursday, June 6, 2019 during commemorations of the 75th anniversary of D-Day. French President Emmanuel Macron and US President Donald Trump delivered speeches during a ceremony, horning the bravery of the Allied troops, who’s landing on the beaches of Normandy forever altered the course of World War II and doomed there Nazi occupation of France. According to the AP, in his remarks, Macron praised the courage of the soldiers, ““to help men and women they didn’t know, to liberate a land most hadn’t seen before, for no other cause but freedom, democracy.” 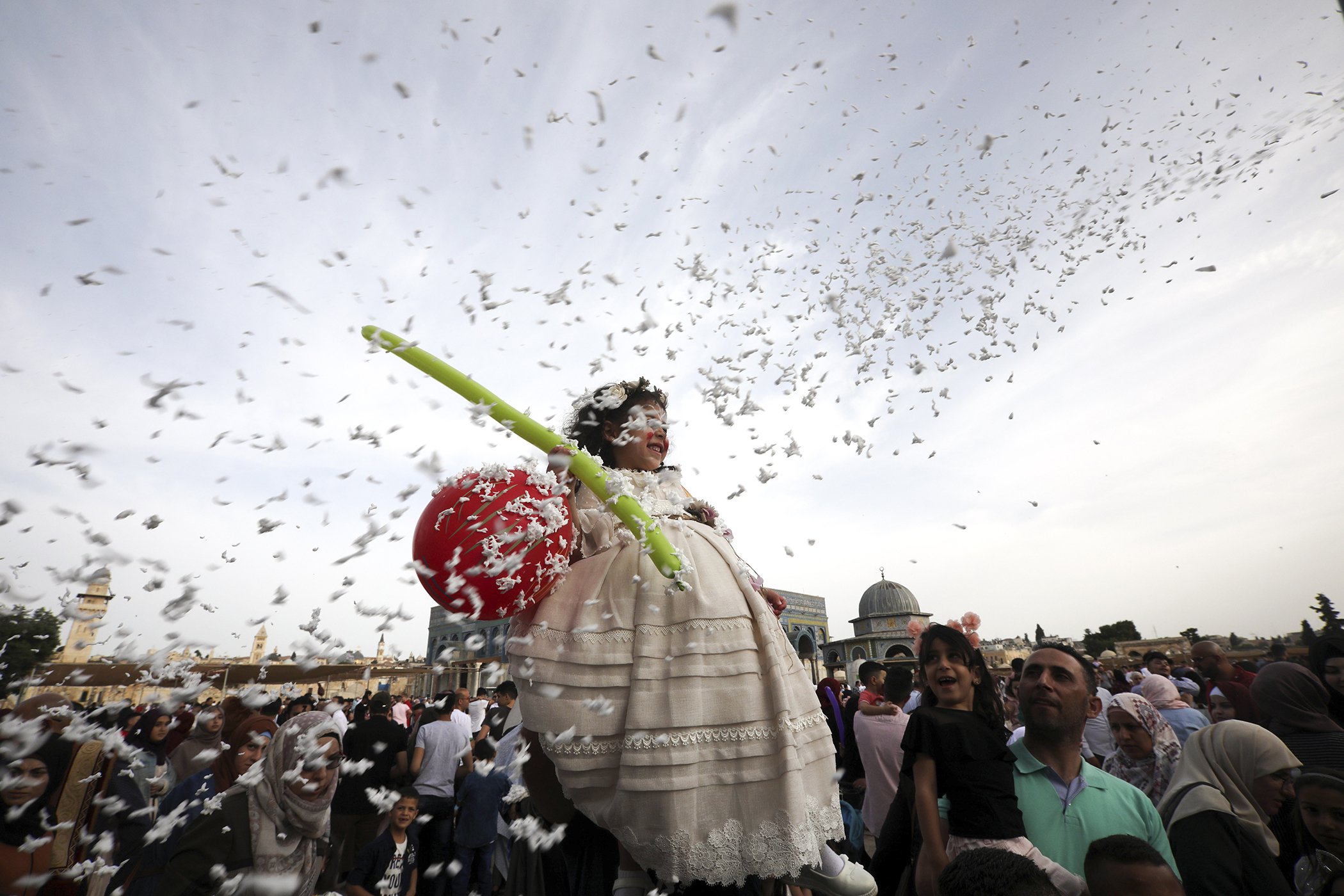 7. Eid al-Fitr in Jerusalem: Palestinians attend of Eid al-Fitr holiday celebrations by the Dome of the Rock shrine in Jerusalem, June 5, 2019. The holiday marks the end of Ramadan, holiest month in Islamic calendar, when Muslims around the world refraining from eating, drinking, smoking, and sex from sunrise to sunset.

8. Eid al-Fitr in the Democratic Republic of the Congo: Muslim worshippers pray during a mass prayer to celebrate Eid al-Fitr on June 4, 2019 at the Stade des Martyrs in Kinshasa.

9. D-Day Anniversary: Veteran Joseph Morettini (C), 82nd Airborne Division 508 PI, salutes as he attends a joined ceremony held in Picauville, northern France, on June 4, 2019, to commemorate the 90th Infantry Division and the US Air Force contribution to the liberation of Picauville, one of the first town liberated by the Allied forces after the D-Day landing in 1944. Morettini jumped during the night between the June 5 and 6, 1944 on La Fiere.

10. Landslides in Uganda: A man sits and looks on at a landslide site in Shisakali village of Bududa district, eastern Uganda, on June 6, 2019. Six people have died and dozens are missing after heavy rains triggered a series of landslides in eastern Uganda’s mountainous Bududa district, the Red Cross said on June 5, 2019. The organization said that around 50 people were believed missing and 150 houses destroyed after the landslides on June 4 night in the foothills of Mount Elgon — an extinct volcano with five major peaks.

11. Record Number Of Migrants Cross the US Border: A man feds his daughter, both originally from Honduras, as the relax at the El Calvario Methodist Church which is housing migrants who are seeking asylum, after they were released by the US Immigration and Customs Enforcement on June 3, 2019 in Las Cruces, New Mexico. Following release to the shelter, asylum seekers are normally transferred from the shelter to their US sponsors as they await their asylum requests. The church In recent months has seen a surge in migrants being sent to their facility by US immigration officials.

12. Eid al-Fitr in the Philippines: Displaced Marawi residents gather to celebrate Eid al-Fitr in a makeshift prayer tent inside a shelter compound for evacuees on June 5, 2019 in Marawi, Philippines. Thousands of displaced and frustrated residents of Marawi also marked their two years living inside dismal makeshift tent shelters in Marawi. The International Committee of the Red Cross (ICRC) said that access to potable water, viable livelihood opportunities, and, most importantly, permanent shelters, are the most pressing problems for the evacuees, including the need to address emotional trauma from the siege. Marawi was ground zero for a five-month-long battle between government forces and a sizable number of IS-inspired groups that lay siege to the city last May 2016 that killed more than a thousand people and leveled the center of the city.